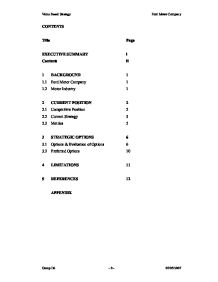 Ford was the pioneer of the motor vehicle. The Ford Model T earned inventor Henry Ford a place in history and with it the foundation on which he, along with 11 others, based the Ford Motor Company. Today, Ford Motor Company is a family of automotive brands consisting of: Ford, Lincoln, Mercury, Mazda, Jaguar, Land Rover, Aston Martin, and Volvo, employing 350,321 (Yahoo Finance) workers in more than 200 countries.

The American oligopoly in the motor industry, consisting of Ford, General Motors and Chrysler, has suffered from poor financial results recently. As reported by www.guardian.co.uk (16/06/03), “the big three US car-makers are wrestling with the combined effects of over-capacity, growing competition from Europe (such as BMW) and Japan (such as Toyota), huge pension and health care costs, and a damaging increase in incentives to get customers into the showrooms and the prospects of slumping sales”.

A real sign that the car industry was in the midst of major change came when www.reuters.com (25/01/04) reported that Toyota had overtaken Ford as the world’s second-biggest automobile manufacturer. The Japanese firm’s strategy of focusing on quality, efficient manufacturing and targeting new markets (such as the fast-growing Asian market) paid off with their market capitalisation, at $120bn, coming to more than the combined totals of the “big three”.

The main value driver for the motor industry is platforms, or production lines. The Japanese

Ford carried out a business review of their five major assembly plants, before implementing a reorganisation program in order to improve efficiency and flexibility within the plants. This concluded that ‘Genk would remain the main factory for Mondeo cars’; the other plants in Europe could ‘produce B (Fiesta Size) and C (Focus size) cars’ but one plant would become a ‘flex plant’ which would be able to switch production between models depending upon changes in demand. Ford is thus addressing its value driver cars per platform, by introducing multi-car production lines (modelled on Toyota’s operations). For example the ‘Jaguar X-400, Ford’s proposed MPV and the new Mondeo will be produced from the same CDW 132 platform’ European Business Review Year: 2003 Volume: 15 Number: 2 Page: 77 – 86). This will improve economies of scale; reduce fixed costs and enables Ford to respond more quickly to shifts in customer demand. Ford has stated that ‘its internal productivity data show a 15.8% improvement from 1999 to 2002, to 19.7 hours per vehicle’ (‘Business Week’, 3860, 50’)

Ford has carried out a drive to drastically cut fixed costs. 2000 workers were made redundant in mainland Europe, part of the aim to reduce the workforce by 10%. Several production plants have been closed and Mazda will now produce ‘Fiesta clones at its Valencia plant in Spain’. Plus they have looked at removing the upper and middle management’s annual bonuses to further reduce fixed costs.

Ford has been hit particularly hard by not addressing this problem.

The practical problems of the investigation were:

All these factors have had an effect in the way that this investigation was carried out, and are responsible for the way in which the report has been documented and reported.