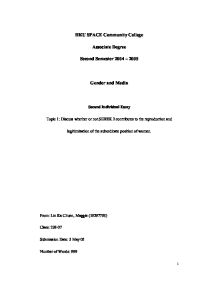 Topic 1: Discuss whether or not SHREK 2 contributes to the reproduction and legitimization of the subordinate position of women.

Media representations tend to highlight the binary opposition which often depicts female as negative inferior and male as positive superior in the hierarchically arranged modern society (Shaughnessy, Stadler. 2002). By repetition, the media can naturalize the subordinate representation of women that no other interpretation is possible, thus leading to the legitimization of masculinity and denigration of femininity (Rayner, Wall & Kruger. P83). Male, or even female, unconsciously accept this subordinate femininity as both natural and inevitable and in some way correct. The film – Shrek 2 – although attempted to challenge the tradition stereotype of female in a male hegemonic society, its success was limited. The film actually helped reproducing and legitimizing the dominant position of men and the subordinate position of women.

The film attempted to challenge the dominating position of hegemonic masculinity. The fairy god mother played an important role in gaining superior position for female. She was a single mother, who owns the biggest magic company and supports her own family financially.

Passive female characters suit into the subordinate positions of the binary opposition as being natural and correct. Firstly, female were repeatedly depict as passive and emotional characters. For example, Fiona wrote in her diary that she was waiting passively for a prince to rescue her and her usual method to express her emotion was dropping tears. Donkey’s wife was said to be emotional and moody at the beginning of the film, who created troubles to Donkey. Secondly, family and love were what female wanted most, which link up female with motherhood. Such as, when the Queen talked about Fiona having babies with Shrek, both Shrek and the king reacted negatively, but the Queen and Fiona seemed passively accepted this idea. The Queen and the fairy both cared about their children, that the Queen said “I don’t want to lose my daughter”, and the fairy was trying her best to protect her son. These showed that family was natural and important to a female. Furthermore, the lyrics of “Holding out for a hero” (see appendix II) sang by the fairy during the wedding stated the passiveness of a female in waiting for a brave and handsome young male.

Appendix II - Holding out For A Hero by Jennifer Saunders

Where have all the good men gone and where are all the gods?
Where's the streetwise Hercules to fight the rising odds?
Isn't there a white knight upon a fiery steed?
Late at night I toss and I turn and I dream of what I need