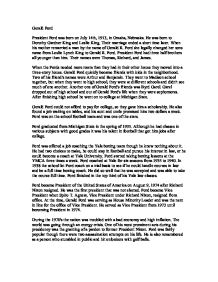 Gerald Ford President Ford was born on July 14th, 1913, in Omaha, Nebraska. He was born to Dorothy Gardner King and Leslie King. Their marriage ended a short time later.

President Ford was born on July 14th, 1913, in Omaha, Nebraska. He was born to Dorothy Gardner King and Leslie King. Their marriage ended a short time later. When his mother remarried a man by the name of Gerald R. Ford she legally changed her sons name from Leslie Lynch King to Gerald R. Ford. President Ford had three half brothers all younger than him. Their names were Thomas, Richard, and James.

When the Fords needed more room than they had in their other house they moved into a three-story house. Gerald Ford quickly became friends with kids in the neighborhood. Two of his friend's names were Arthur and Benjamin. They went to Madison school together, but when they went to high school, they were at different schools and didn't see much of one another. Another one of Gerald Ford's friends was Byrd Garel.

Ford was offered a job coaching the Yale boxing team though he knew nothing about it. He had two choices to make, he could stay in football and pursue his interest in law, or he could become a coach at Yale University. Ford started taking boxing lessons at the YMCA three times a week. Ford coached at Yale for six seasons from 1935 to 1940. In 1938 the school let Ford coach on a trial basis to see if he could handle courses in law and be a full time boxing coach. He did so well that he was accepted and was able to take the course full time. Ford finished in the top third of his Yale law classes.

Ford became President of the United States of America on August 9, 1974 after Richard Nixon resigned. He was the first president that was not elected. Ford became Vice President when Spiro T.

Gerald Ford ran against Jimmy Carter in the 1976 presidential election, but lost by a very large margin to him.

After his presidency, Ford opened up his own library. His wife, Betty, after suffering from an alcohol addiction, opened up the Betty Ford Clinic for addicts of all kinds. Ford also had a hobby. His hobby was golf. Most recently, Gerald Ford gave the eulogy at Richard Nixon's funeral service.

In conclusion, although Gerald Ford was never an elected President he was a man the country could trust. He did everything in his power to bring stability back to the highest office in the country, that of the President of the United States.