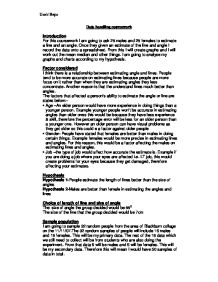 For this coursework I am going to ask 25 males and 25 females to estimate a line and an angle. Once they given an estimate of the line and angle I record the data onto a spreadsheet. From this I will create graphs and I will work out the mean median and other things. I am going to analyse my graphs and charts according to my hypothesis.

I think there is a relationship between estimating angle and lines. People tend to be more accurate on estimating lines because people are more focus on it rather than when they are estimating angles they less concentrate. Another reason is that the understand lines much better than angles.

The factors that affected a person’s ability to estimate the angle or line are states below:-

Choice of length of line and size of angle

I am going to sample 32 random people from the area of Blackburn collage on the 11/11/07.The 32 random samples of people will include 16 males and 16 females. This will be my primary data. The rest of the 18 data which we still need to collect will be from students who are also doing the experiment. From that data 6 will be males and 6 will be females. This will be my secondary data. Therefore this will mean I would have 50 samples of data in total.

The reason that we have chosen the amount of 50 samples of data is because it would avoid bias results. This would also give me a large sample of data, so it will be easier to compare the relationships of the hypothesis, i.e. Males against Females & Line against Angles.

Please tick one of the boxes:

How long do you think this line is?

How big do you think this angle is?

The format of the questionnaire is designed so that it is easy to understand.

This can be shown by having simple questions. The questionnaire asks for your gender because this is essential for the experiment and our estimate for the line and angle. Also the 7cm line and 550 angles are shown so they could estimate.

I encountered problems with my investigation in two points of the experiment.

By looking at the results, I can say that the investigation went good.

Apart from a few anomalies that showed up in some of the graphs the rest of the results went right. My results went according to the hypothesis that I had set out.