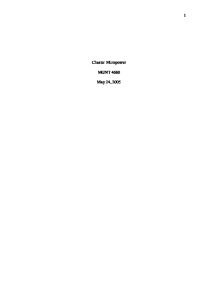 Henry Ford
Henry Ford, an extremely hardworking man, was very curious in his early life because he liked to take things apart and ask many questions. He lead and designed the manufacturing of many cars, including the Model T which was the second largest selling car totaling over 15,000,000. In addition to doing this, he lead and managed an enormous company with the help of very few people. When Henry spoke, people listened. Henry had a few dreams that he thought would change the world. For example, he saw that most of the car companies were making cars for the very wealthy, but Ford looked beyond this and dreamed that every family in the United States would own their own car, even the poor farming families.
Henry was born into a rather poor farming family during Abraham Lincoln's presidency on July 30, 1863, in a small town called Dearborn located in Michigan. During the first years of Henry's life, he would work on the farm, take his toys apart, and ask many questions such as, "How does a clock work?" (Marcus,p. 45). At the age of 16, Henry left home and found a job as a machinist apprentice. Then, from about 1880 until about 1884, he worked many other jobs usually fixing watches and clocks (Marcus, p.53). While doing this, he was learning more and more about mechanics.
Then, in 1885, the first car was invented (

Aird, p. 89). Made by Benz, this car was three-wheeled, very uncomfortable and extremely slow, going approximately 10 miles per hour.

Since there were so many orders for the Model T, in 1909 Henry Ford said that from now on, they would concentrate on making only Model T's in the factory (Lacey, p.72). Ford also hired more workers having a total of 3,000 men working for him in 1910 in his Highland Park factory (Marcus, p. 125). The demand for the Model T and extra parts was becoming so great, that Ford decided to start mass-producing the Model Ts. Now production would be faster, and each car and part would be identical so that they would be easier to fix by mechanics. The mass-production idea that Ford had wasn't new. In fact, it was seen as early as 1800 for things such as guns, clocks, watches, sewing machines, and typewriters. It was also seen in 1902, when Russell Olds adopted mass-production methods to make his "Merry Oldsmobile" on an assembly line. The only difference between Ford's assembly line and Russell Olds, was that Ford had a moving conveyor belt along which the car traveled, and each new part was added. Each worker was given a small, but special job to do, and each worker had a smaller conveyor belt to carry parts they needed. When Henry Ford came out with this creative idea of using mass-production, he had many quotes like; "Good work is hard unless you have good tools and clean surroundings. Employees and employers ought to be treated by the same standard. Are they indifferent?" Or, "Old production methods say that machines must aid man.
...read more.

Ingpen, p. 78). Henry kept inspiring his engineers because the new engine that came out in 1932, now revolutionized the history of cars: the V-8 engine. This engine was the most high tech at that time. Henry Ford and Thomas Edison teamed up to make educational movies for people free of charge. Luther Burbank and Will Rogers would star in these films (Marcus, p. 151).
The year 1943 was a very sad time for Henry Ford because his only child, Edsel, died. Henry then briefly resumed the presidency. Edsel Ford's son Henry Ford Jr., became the president of the company in September 1945. On April 7, 1947, Henry Ford said his last good-byes at the age of 83. Towards the end of Henry Ford's life, a monument was located near the Rouge Plant, in a small town called Greenfield Village. A couple of buildings were made to show Ford's life as a leader of one of the biggest auto manufacturing companies in the world. The monument is still here today, and is visited every day by many people. The greatest car, Ford's Model T was seen on the roads as late as the 1950's, still sturdy and leading the road until the end, just like the inventor himself.