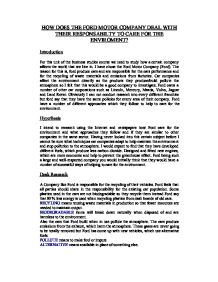 How Does the Ford Motor Company Deal With Their Responsabilty To Care For the Enviroment?

HOW DOES THE FORD MOTOR COMPANY DEAL WITH THEIR RESPONSABILTY TO CARE FOR THE ENVIROMENT?

For this unit of the business studies course we need to study how a certain company affects the world that we live in. I have chose the Ford Motor Company (Ford). The reason for this is, ford produce cars and are responsible for the cars performance and for the recycling of waste materials and emissions from factories. Car companies affect the environment directly as the products they produce/build pollute the atmosphere so I felt that this would be a good company to investigate. Ford owns a number of other car corporations such as Lincoln, Mercury, Mazda, Volvo, Jaguar and Land Rover. Obviously I can not conduct research into every different franchise but ford say that they have the same policies for every area of their company. Ford have a number of different approaches which they follow to help to care for the environment.

I intend to research using the Internet and newspapers

BIODEGRADABLE items will break down naturally when disposed of and are harmless to the environment.

Also the cars that Ford build when in use pollute the atmosphere. The cars produce emissions from the exhaust, which harm the atmosphere. These gases are never going to be totally removed but Ford has come up with new vehicles, which use alternative fuels.

ALTERNATIVE means available in place of something else.

In 2000, the European Union adopted the End-of-Life Vehicle Directive that established minimum requirements for reuse, recycling, and recovery, materials restrictions, and labelling requirements. The Directive also requires that manufacturers take back their vehicles at the end of their useful lives and responsibly dispose of them, including the ones that are already on the road. The financial responsibility for taking back and disposing of the vehicles rests solely with the manufacturers after January 2007.

Ford believes all parties should share in the responsibility for the existing car population in Europe, including manufacturers, recyclers, dismantlers, shredders, dealers, and consumers.

Ford state that they believe that climate change is a serious environmental issue. The combustion of fossil fuels results in emissions of CO2 and other greenhouse gases, the amount of these gases in the atmosphere is increasing and the impact on the climate cannot be ignored. Ford recognises that appropriate actions should be taken now to address this long-term problem.

Ford support a number of methods to help solve this problem. They encourage  customer tax incentives to accelerate and increase the purchase of fuel-efficient advanced technology vehicles like hybrids, fuel cells, clean diesels and alternative fueled vehicles. They will soon offer a hydrogen fueled internal combustion engine stationary generator set, or "Genset", with our partner Ballard, and the fuel efficient HEV Escape. Ford will also offer many other low carbon products including natural gas vehicles, and are committing significant resources to developing hydrogen-powered vehicles. They support energy conservation and market-based programs.