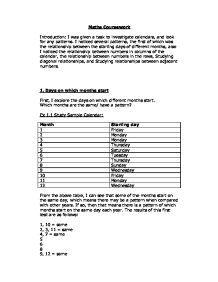 Investigate calendars, and look for any patterns.

1. Days on which months start

First, I explore the days on which different months start.

Which months are the same/ have a pattern?

Now I must investigate to find out if the pattern is the same in other years. In order to do this, I check a calendar of the year 2004.

Therefore, we can see that the dates are thus:

3. Exploring the relationship between numbers in the rows

Now I explore the horizontal numbers…

The formula is obviously n = n here, but will it change in the next few rows?

As you can see from the table above, the formula is quite simple:

Ex 3.5:These are the formulae for the rows in the month of June:

The general expression is n = n + x depending on the start date.

Ex 4.1 Diagonally descending to the left, starting with 2nd January.

The difference is always 6. n x 6 gives the sequence:

I will test the formula on 2 other diagonals descending to the left: one more January, one July.

Ex 4.2: Diagonally descending to the left, starting with 9th January.

Ex 4.3: Diagonally descending to the left, starting with 5th June.

Finally, I decided to test a box of 14 numbers.

I decided to plot a table summarising the above results:

Note that the above table includes the 7 x table, which is once again significant as there are seven days a week. Therefore, there is a relationship between the figures involved in calendar calculations.

However, I must comment on this last table, Ex 5.19– it’s odd that certain numbers you would logically expect to be in the sequence are not present, as you never get the numbers 35, 49, 56 or 77. All these numbers are multiples of 7, and yet they do not follow an orderly sequence as you increase after 9 figures in a box: the pattern is not regular. I am unable to work out why this is so.

I could have explored the following: