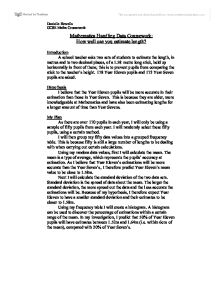 Mathematics Handling Data Coursework: How well can you estimate length?

How well can you estimate length?

A school teacher asks two sets of students to estimate the length, in metres and to two decimal places, of a 1.58 metre long stick, held up horizontally in front of them; this is to prevent pupils from comparing the stick to the teacher’s height. 178 Year Eleven pupils and 173 Year Seven pupils are asked.

I believe that the Year Eleven pupils will be more accurate in their estimation than those in Year Seven. This is because they are older, more knowledgeable at Mathematics and have also been estimating lengths for a longer amount of time than Year Sevens.

As there are over 170 pupils in each year, I will only be using a sample of fifty pupils from each year. I will randomly select these fifty pupils, using a certain method.

I will then group my fifty data values into a grouped frequency table. This is because fifty is still a large number of lengths to be dealing with when carrying out certain calculations.

Using my random data values, first I will calculate the mean. The mean is a type of average, which represents the pupils’ accuracy at estimation. As I believe that Year Eleven’s estimations will be more accurate than the Year Seven’s, I therefore predict Year Eleven’s mean value to be close to 1.58m.

Using my above grouped frequency tables, I will now give estimates for the means of Years Seven and Eleven; it is known as an estimate because I have used mid-points. The mean is a type of average. In support of my hypothesis, I predict that Year Eleven’s mean will be close to 1.58m (the correct length of the stick) than Year Seven’s mean.

I will now calculate the standard deviation, to provide further evidence in support of my hypothesis.

fx and fx² values. When constructing my histogram using frequency densities, I grouped my frequencies together into classes in addition to using mid-points.

There are a number of ways I could improve my investigation into estimation skills, through the analysis of other affecting factors.  I could look at more than one year group or age group, such as Years 7-11 or primary schools. I could compare the estimations of adults or the elderly to those of young people. I could look at the affect of gender on estimation, by comparing the results of males to females. I could also look for similarities or differences in schools in several areas or countries.

Instead of looking at one stick length, my investigation could have looked at multiple sticks. This would show who was good at estimation accurately and who randomly guessed.