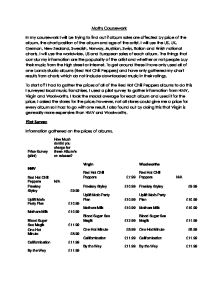 In my coursework I will be trying to find out if album sales are affected by price of the album, the chart position of the album and age of the artist. I will use the US, UK, German, New Zealand, Swedish, Norway, Austrian, Swiss, Italian and Finish national charts. I will use the worldwide, US and European sales of each album. The things that can slur my information are the popularity of the artist and whether or not people buy their music from the high street or internet. To get around these I have only used all of one bands studio albums (Red Hot Chili Peppers) and have only gathered my chart results from charts which do not include downloaded music in their ratings.

To start off I had to gather the prices of all of the Red Hot Chili Peppers albums to do this I surveyed local music franchises. I used a pilot survey to gather information from HMV, Virgin and Woolworths. I took the modal average for each album and used it for the price.

US sales and Price

From this I can gather that album sales are affected slightly more by chart positioning than price.

Showing worldwide, US and European sales and different albums

Overall, I have shown that album sales are affected by price, chart positioning and the age of the artist and I have come to the following conclusions. Price affects the album sales and it is a guide to the buyers of how good the album is, but if the buyer can get the album cheaper through download they will. The most important factor in my opinion is the chart positioning, as it gives the general public an idea of what the album will be like so they will buy it if it has a high ranking. As well as this, Spearmans rank shows us that this is the factor that most affects albums sales as average chart position and worldwide sales had the highest correlation. The other item that affects sales is the age of the band, this also has a lot to do with its popularity, but as the band gets older it gathers more fans and a bigger reputation, which in turn leads to a higher amount of album sales.