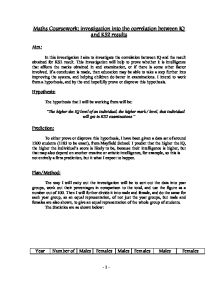 Maths Coursework: investigation into the correlation between IQ and KS2 results

Maths Coursework: investigation into the correlation between IQ and KS2 results

In this investigation I aim to investigate the correlation between IQ and the result obtained for KS2 result. This investigation will help to prove whether it is intelligence that affects the marks obtained in and examination, or if there is some other factor involved. If a conclusion is made, then education may be able to take a step further into improving the system, and helping children do better in examinations. I intend to work from a hypothesis, and by the end hopefully prove or disprove this hypothesis.

The hypothesis that I will be working from will be:

“The higher the IQ level of an individual, the higher mark / level, that individual will get in KS2 examinations.”

To either prove or disprove this hypothesis, I have been given a data set of around 1200 students (1183 to be exact), from Mayfield School. I predict that the higher the IQ, the higher the individual’s score is likely to be, because their intelligence is higher, but that may also depend on another creative or artistic intelligence, for example, so this is

not entirely a firm prediction, but it what I expect to happen.

The way I will catty out the investigation will be to sort out the data into year groups, work out their percentages in comparison to the total, and use the figure as a number out of 100. 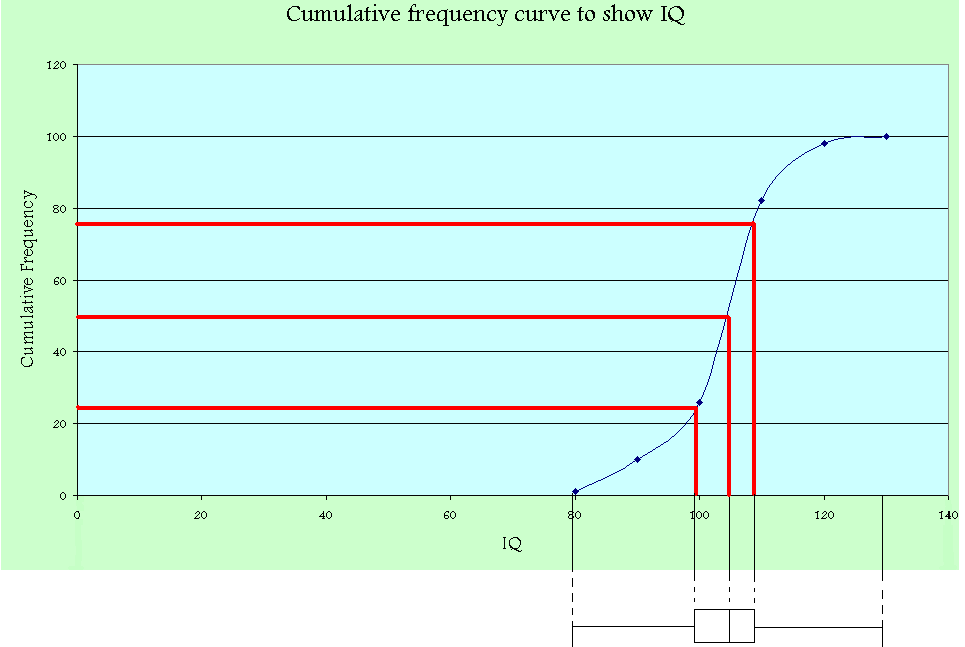 In conclusion, I believe that I have proved my hypothesis correct to a certain extent; I have proved that there is a correlation between IQ and KS2 result, and that the higher the IQ is, the chances of getting a higher level increase. Because of the gradient of the line of best fit (the slope being not very steep), IQ needs to increase at least 5 points to move on to the next level, if no other factors play a role in your intelligence.

I decided not to use English in my testing because English results for years 10 and 11 were not provided, and so the averages would not be fair. I believe that I have proved my hypothesis correct, because by analysing each data value before the scatter graphs, I made note of the range in which to look when analysing the scatter graphs, ignoring anomalies. So by using the inter-quartile range and then looking at the scatter graphs, I have come to a definite conclusion that IQ does have an effect on you KS2 result, but it is not wholly responsible for your result because the correlation coefficient was 0.7, and there is the other 0.3, the anomalies which leads me to believe that there are other factors involved in getting you a god grade, although IQ plays a majority role in this. Creativity and Social intelligence are just a few ideas, because IQ is a generalisation of intelligence. So to this extent I have proved the following statement correct:

“The higher the IQ level of an individual, the higher mark / level, that individual will get in KS2 examinations.”