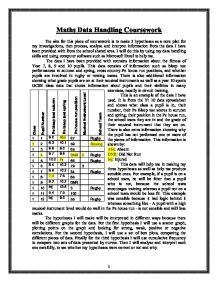 The aim for this piece of coursework is to make 3 hypotheses as a core plan for my investigations, then process, analyse and interpret information from the data I have been provided with from the school shared area. I will do this by using my data handling skills and using computer software such as Microsoft Excel to help me.

The data I have been provided with contains information about the fitness of Year 7, 8, 9 and 10 pupils. This data consists of information such as bleep test performances in autumn and spring, cross country-Pe house run positions, and whether pupils are involved in rugby or rowing teams. There is also additional information showing what grade pupils are on at their musical instruments as well as a year 10 sports GCSE class data that shows information about pupils and their abilities in many exercises, mostly in circuit training.

This is an example of the data I have used. It is from the Yr 10 data spreadsheet and shows what class a pupil is in, their number, their Pe Bleep test scores in autumn and spring, their position in the Pe house run, the school team they are in and the grade of their musical instrument that they are on. There is also extra information showing why the pupil has not performed one or more of the pieces of information. This information is shown by:

DNR: Did Not Run

This data will help me in making my three hypotheses as well as help me produce sensible ones.

Box plots are useful for comparing the mean and median scores of the bleep test as well as finding out the skewness. The skewness is like the correlation but of a set of box plots. It also shows additional information such as the lower and upper quartiles. All of this information will help me interpret my results.

In order to predict what I will see in terms of the skewness of the box plots I have made two stem and leaf diagrams: 1 for the pupils’ year 7 bleep test scores, and 1 for the pupils’ year 10 bleep test scores. This will help me compare the 2 and look for any particular shape that takes place. I have done this on Excel by sorting the data in ascending order and then taking the information to make a stem and leaf diagram. 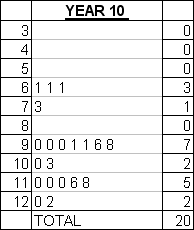 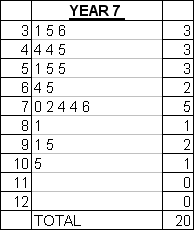 On the whole, the cumulative frequency graph’s shape was the same as my prediction. It shows that the non-rugby line is very inconsistent and moves up and down, it also has a very steep line between the LQ and the median. Whereas the rugby players line is very consistent as it is smooth and there are no harsh turns in the line. This shows that the rugby players achieve much more consistent scores than the non rugby players, who get a very big range of scores. This might be due to the fact that there were many more non-rugby players than rugby players, which means that the range will be big. In order to achieve the best results, I will need to get a spreadsheet only showing one class with many rugby players, to lessen the amount of non rugby and maybe obtain a more accurate result.

This clearly shows that the rugby players’ scores are more consistent than the non-rugby players, which are widely spread out which is what I predicted to see.