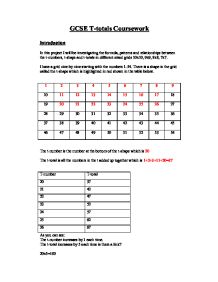 In this project I will be investigating the formula, patterns and relationships between the t-numbers, t-shape and t-totals in different sized grids 10x10, 9x9, 8x8, 7x7.

I have a grid nine by nine starting with the numbers 1-54. There is a shape in the grid called the t-shape which is highlighted in red shown in the table below.

As you can see:

The t-number increases by 1 each time.

The t-total increases by 5 each time is there a link?

How did I work out this and what can we do with this formula?

The formula starts with 5 as there is a rise between the t-total of 5 each time. We then -63. I got this number by working out the difference between the t-number and the other numbers in the t-shape. E.g.

This proves my formula works.

I will now try using grids of different sizes and translating the t-shape into different positions. I will then investigate the relationship between the t-number, t-total and grid size.

The t-number and t-total have both risen even though the t-shape is in the same place as it was before. The t-number has risen by 2 and the t-total by 3. This is because I am now using a ten by ten grid. I will now try and find some more t-numbers and t-totals for some more t-shapes on this grid.

Now I will try and find a formula for the ten by ten grid. I will first find the difference between the t-total and other numbers in the t-shape.

Here is another way to figure out the formula

So this would mean that my formula will be 5n-70

I will try and test my new formula

The same formula can be used for each grid with only changing the last number in the formula. I will now try it on a different sized grid to prove this.

As you can see by changing the grid size we have to change the end of the formula but we still keep the rule of how you get the number to minus in the formula.

So I can find formulas for all grid sizes, which are shown below in the table

So therefore the formula will be:

To check and make sure the formula works we do:

I will now rotate the t-shape 180 degrees from its last position. I predict that the same will happen as before and the equation will stay the same but the minus sign will change to a plus sign. I will prove this below.

To find the formula 5n+7 that I predicted we do:

To check the formula we do:

The formula is correct.

In this coursework I found many ways to solve the problem with the t-shape being in various different positions and different grid sizes. I have made my calculations less difficult by creating a formula which changes according to the different circumstances.

Below I have shown the different formulas I have come up with these only apply to the 9x9 grid.