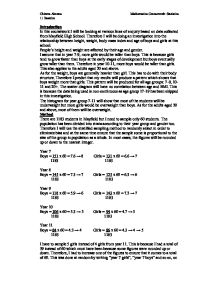 mayfield course work -boys are generally heavier than girl. This has to do with their body structure. Therefore I predict that my results will produce a pattern which shows that boys weight more than girls.

In this coursework I will be looking at various lines of enquiry based on data collected from Mayfield High School. Therefore I will be doing an investigation into the relationship between height, weight, body mass index and age of boys and girls at this school.

People’s height and weight are affected by their age and gender.

As for the weight, boys are generally heavier than girl. This has to do with their body structure. Therefore I predict that my results will produce a pattern which shows that boys weight more than girls. This pattern will be produced for all age groups: 7-9, 10-11 and 20+. The scatter diagram will have no correlation between age and BMI. This is because the data being used is non-continuous as age group 17-19 has been skipped in this investigation.

The histogram for year group 7-11 will show that most of the students will be underweight but more girls would be overweight than boys. As for the adults aged 20 and above, most of them will be overweight.

There are 1183 students in Mayfield but I need to sample only 60 students. The population has been divided into strata according to their year group and gender too.

PIE CHART:  The pie charts will be used to show the relationship between height and age group. The result will then compared between boys and girls of the different age groups.

With reference to table 1, the median group and estimated mean in the sample were higher for boys than for girls. However the sample for girls in year group 7-9 were more spread out with a range of 0.49m compared to 0.39m for the boys. This must have affected the mean. The evidence from the sample suggests that in year group 7-9, 12 boys out of 41 pupils, have a height between 1.6m and 1.69m whilst 7 girls out of the same 41 pupils have a height of 1.6m and 1.69m. This prove that the first part of my hypothesis is wrong: i predicted that in year 7-9, more girls would be taller than boys but my result shows more boys to be taller than girls.
However in year group 10-11, there were more girls than boys with a height between 1.6m and 1.69m though the samples for boys were more spread out with a range of 0.49m compared to 0.39 for the girls. Once again my hypothesis is wrong because i predicted that in year 10-11, boys would be taller than girl.
These conclusions are based on a sample of only 60 pupils. Therefore the limitation of data could have affected the accuracy of my hypothesis. If I could extend the sample my hypothesis is likely to be right.

CUMULATIVE FREQUENCY: the cumulative frequency graph will be used to compare the boys and girls weight in each age group. I will be commenting on the inter-quartile range and median and making reference to the box plot.