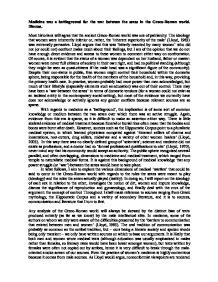 &quot;Medicine was a Battleground for the war between the sexes in the Greco-Roman World&quot;. Discuss.

Medicine was a battleground for the war between the sexes in the Greco-Roman world. Discuss.

Most historians will agree that the ancient Greco-Roman world was one of patriarchy. The ideology that women were inherently inferior or, rather, the ‘inherent superiority of the male’ (Lloyd, 1983) was extremely pervasive. Lloyd argues that this was ‘bitterly resented by many women’ who did not (or could not) confront males much about their feelings, but I am of the opinion that we do not have enough direct evidence and access to these women to comment either way on confrontation. Of course, it is evident that the status of a woman was dependant on her husband, father or master: women were never full citizens of society in their own right, and had no political standing (although they might be seen as quasi-citizens if the male head was a significant figure of the community). Despite their non-status in public, free women might control their household within the domestic sphere, being responsible for the health of the members of the household and, in this way, providing the primary health care. In practice, women probably had more power than men acknowledged, but much of their lifestyle (especially elements such as education) was out of their control. There may have been a ‘war between the sexes’ in terms of domestic tensions (for a woman could not exist as an isolated entity in the contemporary social setting), but most of the evidence we currently have does not acknowledge or actively ignores any gender conflicts because relevant sources are so sparse.

With regards to medicine as a ‘battleground’, the implication is of some sort of common knowledge or medium between the two sexes over which there was an active struggle.

Epidemics III, case 9) or only in association with the male head of the household (e.g. Epidemics III, cases 10 and 11), compared with naming men like ‘Autonomus’ and ‘Hecason’ (Epidemics V, cases 27 and 30 respectively), in case the author was presumed to be using female reports as substantiating his ideology. ‘In general, the social status [of female patients] varies, as does that of the males… but only a very small proportion of the women are named’ (Lloyd, 1983).

One element of medicine, which is less skewed than others by the male bias of medical literature, is the negative connotations associated with women in relation to men. For the Hippocratics, woman is ‘a radically different animal from man in structure and processes’, while for Aristotle, she is ‘a substandard man’ (Dean-Jones, 1994). Plato suggests women are just as capable as men in becoming philosophers, but in The Republic he asserts women are weaker than males, and declares his belief in the notion of transmigration in Timaeus: ‘all those creatures generated as men who proved themselves cowardly and spent their lives in wrong-doing were transformed, at their second incarnation, into women’. More specifically within the realm of medicine, women are connected to with evil and are held responsible for illness and disease across the world. According to Greek mythology, in Hesiod’s Works and Days, ‘before [the creation of women] the tribes of men lived on earth free from evils and hard toil and grievous diseases… but the woman took off the great lid of the jar with her hands and scattered dire sorrows for men’ (chapters 70-105). However, if illness and disease are inherently tied up with the presence of women, all medical treatment should be concerned primarily with them; for curing the origins of disease (Pandora and all women)

Again, my analysis is weakened by the lack of ‘direct access to the woman patients and women healers themselves’ (Lloyd, 1983). If more sources from female healers were in existence, then perhaps we could analyse this ‘war’ more critically. As it is, male healers and scribes had a vested interest in not copying, transmitting or dispersing texts written by women, so we cannot tell how literate the female healers were, never mind any tensions between the sexes. In effect, the medical battleground was hugely unequal because Greco-Roman men had control and dominated the field of scholarly transmission, so any strengths the female healers had are restricted to their contemporary era, and we have little knowledge of their practice. In conclusion, to talk of a ‘war’ between the sexes is misleading: it implies a two-sided argument. As it is, our sources do not let us hear the female perspective with accuracy, and the perception of medicine we can gauge from male texts suggest social norms did not entertain the possibility that women could ‘fight’: their knowledge was not valid compared to male healers, patients and citizens, and it is likely many women were more eager to go along with the social norms than contest them.