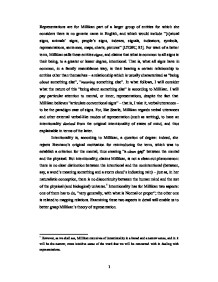 Representations are for Millikan part of a larger group of entities for which she considers there is no generic name in English, and which would include “[n]atural signs, animals’ signs, people’s signs, indexes, signals, indicators, symbols, representations, sentences, maps, charts, pictures” [LTOBC, 85]. For want of a better term, Millikan calls these entities signs, and claims thatwhat is common to all signs is their being, to a greater or lesser degree, intentional. That is, what all signs have in common, in a family resemblance way, is their bearing a certain relationship to entities other than themselves – a relationship which is usually characterized as “being about something else”, “meaning something else”. In what follows, I will consider what the nature of this “being about something else” is according to Millikan. I will pay particular attention to mental, or inner, representations, despite the fact that Millikan believes “articulate conventional signs” – that is, I take it, verbal utterances – to be the paradigm case of signs. For, like Searle, Millikan regards verbal utterances and other external verbal-like modes of representation (such as writing), to have an intentionality derived from the original intentionality of states of mind, and thus explainable in terms of the latter.

Intentionality is, according to Millikan, a question of degree: indeed, she rejects Brentano’s original motivation for reintroducing the term, which was to establish a criterion for the mental, thus creating “a clean gap” between the mental and the physical. But intentionality, claims Millikan, is not a clean-cut phenomenon: there is no clear distinction between the intentional and the nonintentional (between, say, a word’s meaning something and a storm cloud’s indicating rain) – just as, in her naturalistic conception, there is no discontinuity between the human mind and the rest of the physical (and biological) universe.[1]

However, in the case of representations, it seems that we are dealing with a rather peculiar form of mapping. For the number of mathematically isomorphic mappings is potentially infinite – one can map the items in any given domain onto practically anything. However, representation is a mapping between, say, an inner state of mind S and a given item I such that it can be said to be corrector incorrect, true or false. Either there actually is an item I such as S is meant to represent, or there is not. This assessability of mental representations in terms of truth or falsity as often led, following Frege and Davidson, to characterize theories of meaning as theories of truth. However, as Fodor noted in his first “Psychosemantics”, this definition of representational meaning in terms of a correspondence theory of truth begs the question. According to this sort of theories, representations are true or correct if and only if there is some mapping function which maps those representations onto parts of the real world. But the question arises then of what it is that makes a representation true or correct. As Millikan puts it, echoing Fodor (for once),

If any correspondence theory of truth is to avoid vacuousness, it must be a theory that tells what is different or special about the mapping relations that map representations onto representeds. [LTOBC, 86-87]

LTOBC is quite a book to digest).

Another possible criticism to Millikan’s teleosemantics would be the place (or the lack thereof) it ascribes to consciousness. According to the now famous Swampman argument first formulated by Davidson, a randomly materialized creature with exactly a physical configuration type-identical to mine would have intentional, meaningful mental states.

Against this “Swampman intuitionism” Millikan and others have claimed that intentionality and meaning supervene on the proper functions of the organism in question, and such proper functions are determined by the evolutionary history of the organism. The poor Swampman, lacking such evolutionary history (in Davidson’s account, it would have been created by the molecular transfiguration of a lightning-struck tree trunk), would have no proper functions, and therefore no mental representations, no intentionality, no meaningful mental content. However, grants Millikan, the Swampman’s mental states would have a purely phenomenal content, insofar as it would be able of perception.

It has been suggested – by David Chalmers among others – that it may not be really possible to give an account of  intentionality which does not refer to consciousness, and vice versa. Certainly, it does seem rather counterintuitive to see intentionality as (exclusively) ethologically motivated. Moreover, it is not very clear what the teleological purpose of consciousness might be – what proper function of our cognitive systems is fulfilled by our being conscious?

[1] However, as we shall see, Millikan conceives of intentionality in a broad and a narrow sense, and in it will be the narrow, more intuitive sense of the word that we will be concerned with in dealing with representations.

[2] Which of course does not mean that desires are always fulfilled – as Millikan strikingly puts it, “many desires, like sperm, emerge in a world that does not permit their proper functions to be performed”.

This student written piece of work is one of many that can be found in our GCSE Phi Function section.