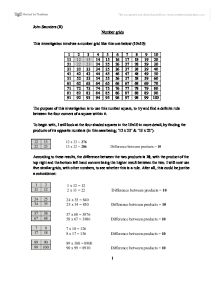 This investigation involves a number grid like this one below (10x10):

The purpose of this investigation is to use this number square, to try and find a definite rule between the four corners of a square within it.

According to these results, the difference between the two products is 10, with the product of the top right and the bottom left hand corners being the higher result between the two. I will now use five similar grids, with other numbers, to see whether this is a rule. After all, this could be just be a coincidence:

In every grid I did, the difference between the products always turns out to be the same. The difference is always 10.

The explanation for this is fairly complicated:

The reason is that for the top right and bottom left numbers, you always multiply the top right number by a number one larger than in the top left box. Without taking the different numbers on the top row into account, this would mean that the difference between the two products would now be the number in the bottom right hand corner. However, because the top

The rule for this again is the same, only with minor alterations. As with the three by three, it is the same equation, but for the top right and bottom left hand corners, you multiply the same number in the bottom row by an extra 3 in the top row. This leaves a gap of ‘3 x 40’, which equals 120. This is, of course, without taking the difference of the numbers in the top row into account, but because the difference between 37 and 40 is 3 and not 2, the number in the top hand corner that is taken away is trebled to be ‘3 x 10’ (30). This total eventually leaves 120 – 30, which following the rule does equal 90.

This again clearly shows that because the formula shows the pattern with my examples, that this is a definite rule.

Now, I have noticed a pattern between the 2x2, 3x3 and 4x4 patterns. The pattern concerned between the differences is 10, 40 and 90. If you look at the first digits of these numbers, they read 1, 4 and 9, which are all square numbers. This would make perfect sense, because the areas we are using of number grids are square, and the difference between the products of the 2x2 is 10, and not 1 (meaning all the square numbers would be 10 times larger than they would be).

So, my rule that I am predicting is that the differences go up in square numbers, multiplied by 10. This would mean a 5x5 grid would have differences of 160. Lets see if it does this:

Here is the investigation for a 5x5 grid…

The rule for this again is the same, only with minor alterations. This is because as in the four by four, it is the same equation, but for the top right and bottom left hand corners, you multiply the same number in the bottom row by an extra 4 (in the top row). This leaves a gap of ‘4 x 45’, which equals 180. This is, without taking the difference of the numbers in the top row into account, but because the difference between 41 and 45 is 4 and not 3, the number in the top hand corner that is taken away is quadrupled to be 4 x 5 (20). This total eventually leaves 180 – 20, which following the rule does equal 160.

As I thought, the difference between the products of a 5x5 is 160. I will now draw up a table of all my results and so I can work out a formula for all the differences:

The formula for t can be used for any number, and the difference will always come out correct no matter what number you replace it with. The formula will also tell us that the square number theory is correct, as it fits all the differences between 2 x 2 and 5 x 5 (in the table).

This next table represents the two formulae I found for each grid. From these different formulae, I will try and determine a pattern between the numbers to create an overall formula (as I did in my first table) to be used for any number of rows and columns of a grid.

These rather complicated formulae in the t x t row represent what any number of rows/columns in a grid would produce in the same way as in 2 x 2 etc. These will not necessarily help in determining patterns, but it does help if we want to determine the rule again using higher number grids quicker.

I will now investigate these number patterns in the same way, only using different shapes other than squares:

I will use the different shaded shapes to work out rules between the numbers.

This shows that the two products have a difference of 8. However, we need to use more examples to be sure this is always what happens, even though I know it will, as all the results were the same with the 10x10 grid AND with the 9x9 grid:

This did follow the pattern I suggested it would do earlier on. This means that I can now find the difference for the y x y area square (not ‘n x n’ or ‘t x t’ because n corresponds to the value in the top right corner of the grid, and t corresponds to where a value is).

This also follows the other pattern that I found on page two – that the average difference between the numbers that are being multiplied is the same as the overall difference. Here is a table for this:

This table is for the product differences:

y = length of any side of the square grid:

This rule is very simple. The value of y is the number of squares on any one side of the grid that is being used. For example, on a 10x10, the length of all sides is 10 squares, so y will equal 10.