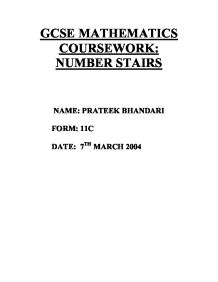 For the other 3-step stairs, investigate the relationship between the stair total and the position of the stair shape on the grid.

As described in the question I will be investigating the relationship between stair total and the position of the stair shape on a 10 by 10 grid. To find that out, I have decided to take three stairs on different positions on the grid and find their stair total. After that, I will find a formula through which I can calculate the stair total of any stair number.

Stair number up by 20

stair number up by 1.

If reversed it would be:

Therefore this can be calculated in a similar way:

If reversed it would be:

In conclusion, I can now calculate the stair total of a three level stair on any position on the grid 10 by 10 through the general formula 6n + 44.

Investigate further the relationship between the stair total and other step stairs on other number grids.

My objective in this section will be to further investigate the relationship between the stair total and other step stairs on other number grids. To do that I will need to find a general formula through which I can calculate any stair total or stair number on any number grid at any position.

To find the formula I will first and foremost try the same formula in part 1 on a stair shape on an 8 by 8 number grid.

The stair total for this stair will be:

This therefore clearly indicates that if we use the

formula 6n + 44 on other number grids then it

The main reasons for this are:

If I calculate this stair total with the same formula

then it will be:

The total for this stair is:

The stair total through the formula will be:

The two formulas were:

If I had more time then I could have done the following changes: