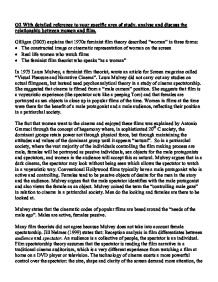 Q2 With detailed reference to your specific area of study, analyse and discuss the relationship between women and film. eg Charlies Angels

Q2 With detailed reference to your specific area of study, analyse and discuss the relationship between women and film. Gilligan (2003) explains that 1970s feminist film theory described "woman" in three forms: * The constructed image or cinematic representation of woman on the screen * Real life women who watch films * The feminist film theorist who speaks "as a woman" In 1975 Laura Mulvey, a feminist film theorist, wrote an article for Screen magazine called "Visual Pleasure and Narrative Cinema". Laura Mulvey did not carry out any studies on actual filmgoers, but instead used psychoanalytical theory in a study of cinema spectatorship. She suggested that cinema is filmed from a "male camera" position. She suggests that film is a voyeuristic experience (the spectator acts like a peeping Tom) and that females are portrayed as sex objects in close up in popular films of the time. Women in films at the time were there for the benefit of a male protagonist and a male audience, reflecting their position in a patriarchal society. The fact that women went to the cinema and enjoyed these films was explained by Antonio Gramsci through the concept of hegemony where, in sophisticated 20th C society, the dominant groups retain power not through physical force, but through maintaining the attitudes and values of the dominant group until it appears "natural". ...read more.

The male responses are quite different to the female responses. The majority of the males thought the Angels were portrayed as sexy or seductive. The second question differed for the male and female members of the audience. The question for the females asked which of the Angels they could identify most with and the question for the males asked which of the three Angels they enjoyed watching the most. The male responses stated that Cameron Diaz was the favourite Angel because she was 'not wearing many clothes' and 'looked sexy'. Conversely, the girl's favourite Angel to identify with was in fact Drew Barrymore because of 'good sense of humour', 'independent', 'carefree' etc. However one response that stood out for me was: "I could identify most with Lucy Liu because she can't cook". I thought this was a very interesting response. It highlighted the way in which the Angels are portrayed differently from other action genre films where the female leads are either in need of rescuing or a support/reward for the male protagonist. I would have liked to explore this further in another questionnaire but ran out of time. Question three involved filling out a table and scoring each of the angels out of ten for 'Sexiness', 'Glamour' and 'Power'. The boys rated Cameron Diaz as top for sexiness, Lucy Liu for glamour and Lucy Liu also for power. ...read more.

Most of their films therefore reflect the patriarchal ideology of the industry and wider society. Since the start of film, screen women have been constructed in a way that maintains the patriarchal society through hegemony. Women in action genre films are usually portrayed as passive; rewards for the male protagonist or someone who needs to be rescued. Feminists have rejected this type of representation and applauded the stronger image of female characters such as Ripley in the Aliens trilogy. Ripley is however portrayed in a very masculine way -very short hair, boiler suit, muscles and this is not what many young women today aspire to. The values and attitudes in our post modern society are changing. Female audiences are bombarded with media images full of sexual stereotyping. However, the modern female audience is able to enjoy the portrayal of women in Charlie's Angels as beautiful and also to celebrate their power over the male protagonists, particularly when they work together. There is much irony in the sexual stereotyping in the film and this is used to great effect as comedy. Scopophilia is the joy of watching on screen. The final proof that Charlie's Angels offers visual pleasure for its female audience comes from the IMDb ratings. The group giving the highest rating to the film was the females under 18. Young women/girls enjoyed it more than young men. Maybe it was aimed at young women and therefore not filmed from the male gaze after all. ?? ?? ?? ?? ...read more.