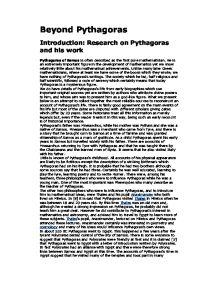 Research on Pythagoras and his work.

Introduction: Research on Pythagoras and his work

Pythagoras of Samos is often described as the first pure mathematician. He is an extremely important figure in the development of mathematics yet we know relatively little about his mathematical achievements. Unlike many later Greek mathematicians, where at least we have some of the books which they wrote, we have nothing of Pythagoras's writings. The society which he led, half religious and half scientific, followed a code of secrecy which certainly means that today Pythagoras is a mysterious figure.

We do have details of Pythagoras's life from early biographies which use important original sources yet are written by authors who attribute divine powers to him, and whose aim was to present him as a god-like figure. What we present below is an attempt to collect together the most reliable sources to reconstruct an account of Pythagoras's life. There is fairly good agreement on the main events of his life but most of the dates are disputed with different scholars giving dates which differ by 20 years. Some historians treat all this information as merely legends but, even if the reader treats it in this way, being such an early record it is of historical importance.

Pythagoras's father was Mnesarchus, while his mother was Pythais and she was a native of Samos. Mnesarchus was a merchant who came from Tyre, and there is a story that he brought corn to Samos at a time of famine and was granted citizenship of Samos as a mark of gratitude. As a child Pythagoras spent his early years in Samos but travelled widely with his father. There are accounts of Mnesarchus returning to Tyre with Pythagoras and that he was taught there by the Chaldaeans and the learned men of Syria.

This seems accepted by most but Iamblichus himself does not accept this version and argues that the attack by Cylon was a minor affair and that Pythagoras returned to Croton. Certainly the Pythagorean Society thrived for many years after this and spread from Croton to many other Italian cities. Gorman [6] argues that this is a strong reason to believe that Pythagoras returned to Croton and quotes other evidence such as the widely reported age of Pythagoras as around 100 at the time of his death and the fact that many sources say that Pythagoras taught Empedokles to claim that he must have lived well after 480 BC.

The evidence is unclear as to when and where the death of Pythagoras occurred. Certainly the Pythagorean Society expanded rapidly after 500 BC, became political in nature and also spilt into a number of factions. In 460 BC the Society [2]:-

... was violently suppressed. Its meeting houses were everywhere sacked and burned; mention is made in particular of "the house of Milo" in Croton, where 50 or 60 Pythagoreans were surprised and slain. Those who survived took refuge at Thebes and other places.

I now have to find out if the following sets of numbers satisfy a similar condition of (smallest number) 2+ (middle number) 2= (largest number) 2.

Here is a table containing the results:

Perimeter and area of the right-angled triangles


2n² - 1 and the Relationship between the shortest and middle side both match. So…


2n² + 1 and the Relationship between the shortest and longest sides both match. So…

Relationship between the shortest and longest sides = 2n² + 1


The next relationship I'm going to find is between the middle and longest side.

I am certain that the relationship between the longest and middle side is 1.


1 and the Relationship between the middle and longest sides both match. So…

Relationship between the middle and longest sides = 1

Using these same principles, I can work out any relationship, to prove this, I will work out the relationship between the shortest side and the perimeter and then the area.

I am certain that this is the write answer. So…

Relationship between the Perimeter and Shortest side = 4n² + 4n + 1

The area is even simpler because, all you have to do is knock the 2n + 1 out of the equation. So…

Relationship between the Area and Shortest side =