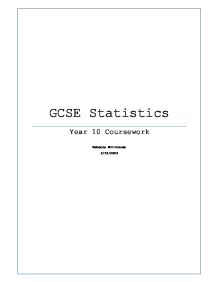 The aim of this investigation is to discover if there is a link between two variables and see whether they are dependant or independent on each other. In order to carry this out with reliable results I will need to collect suitable data which I can use statistical methods to calculate and analyse correlation coefficients and regression lines, taking into account any anomalies that may affect the correlation coefficients and regression.

In this investigation I am going to be looking into whether more females prefer creative subjects to males, and then in turn whether males prefer logical subjects.  I believe that female students will prefer the creative subjects such as Art and Music as when they were younger they may have spent more time practising these with family and friends. I also believe that females are better at creative subjects then males, and if a student is good at a subject they enjoy it more. I feel that this data should provide me with a strong link. I will also investigate whether there is a link between the amount of television watched and gender. If my first hypothesis is proven correct then I will go on to test whether males watch more telvison than females. I believe that

From the sample taken, we can see that females favour creative subjects over logical ones, and males favour logical subjects. The difference between males and females is quite conclusive however the sample taken from the data is quite small which may lead to bias. Also because students were only asked to name their favourite subjects, this may not accurately reflect their subject choices. The students preferred subjects may not necessarily be their strongest academically and the results will not come through with this investigation.

The sample taken was relatively small compared to the total population of the school, being only 6.25% of the data. This is a limitation of the investigation as it could create bias between the groups, as they are of different sizes.

Another limitation is the fact that the data was catagoric, putting a restraint of the methods of data manipulation that could be used. This puts a limit on how I could prove my hypothesis, which may of lead to inaccurate results.

In total I conclude that my hypothesis was correct, however the likelyness of all the students in the school or even in the UK fitting this pattern is minimal. The best way to see if it fit the whole pattern would be to take a bigger sample from a wider range and spend longer on the different calculations.