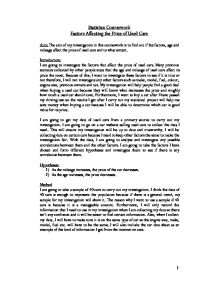 Aim: The aim of my investigation in this coursework is to find out if the factors, age and mileage affect the price of used cars and to what extent.

I am going to investigate the factors that affect the price of used cars. Many previous statistics collected by other people state that the age and mileage of used cars affect its price the most. Because of this, I want to investigate these factors to see if it is true or not therefore, I will not investigate any other factors such as make, model, fuel, colour, engine size, previous owners and tax. My investigation will help people find a good deal when buying a used car because they will know what decreases the price and roughly how much a used car should cost. Furthermore, I want to buy a car after I have passed my driving test so the results I get after I carry out my statistical project will help me save money when buying a car because I will be able to determine which car is good value for its price.

I am going to get my data of used cars from a primary source to carry out my investigation. I am going to go on a car website selling used cars to collect the data I need.

I put my data in order if size so it is easier when making calculations such as the median. I didn’t include the year because they are all the same so the results I get will be reliable.

I worked out the mean of my data because it is usually the most representative and because it uses all the data. However, it may be distorted by outliers. I also worked out the median because it is not distorted by outliers. However, it is not always a good representation of the data so I will use it together with the range and interquartile range to make it more useful. I can’t find the mode because all of the data is different. There isn’t one that is more common than others. 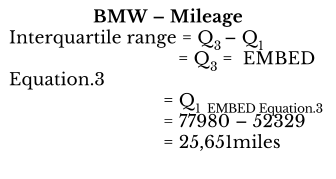 The standard deviation of the price data is quite small so the data isn’t very spread out. 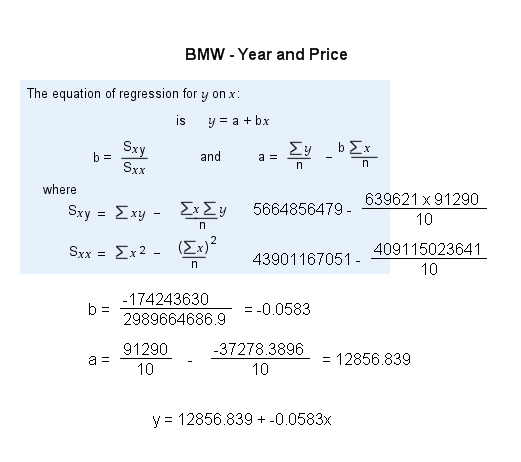 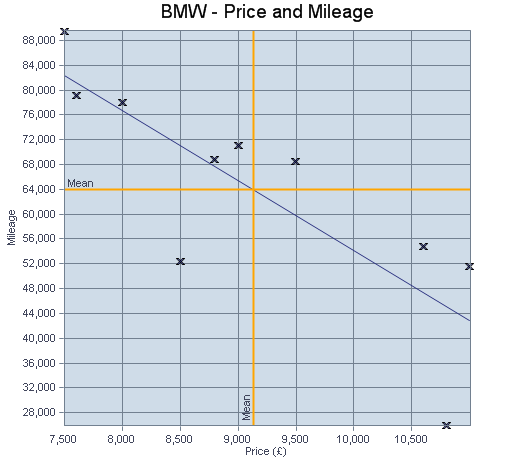 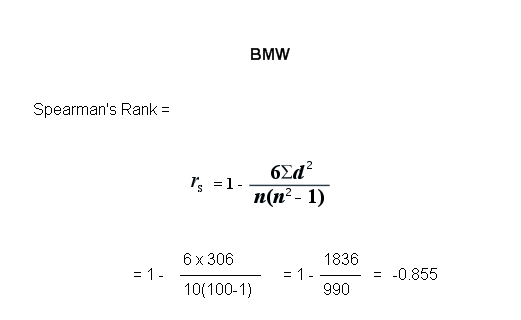 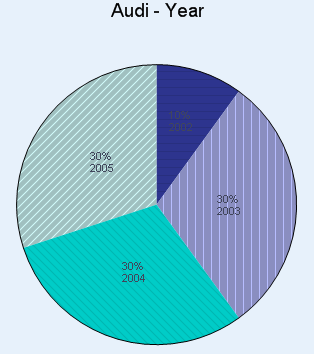 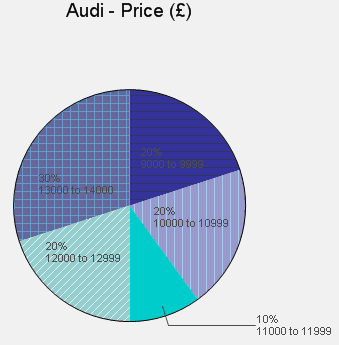 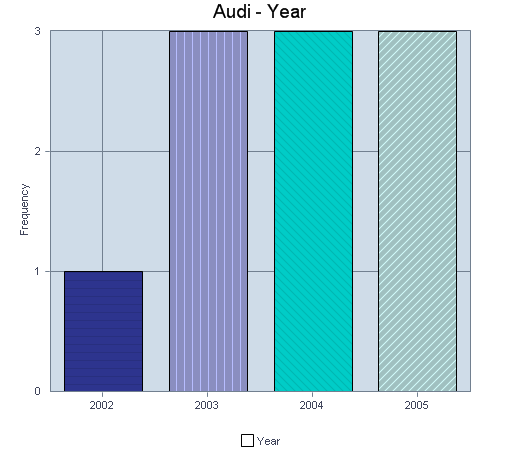 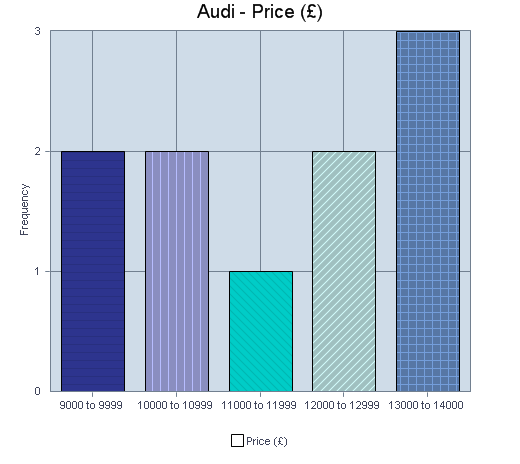 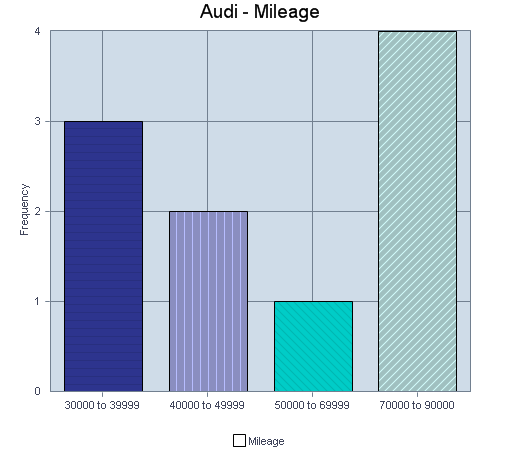 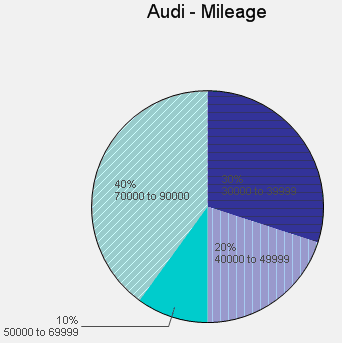 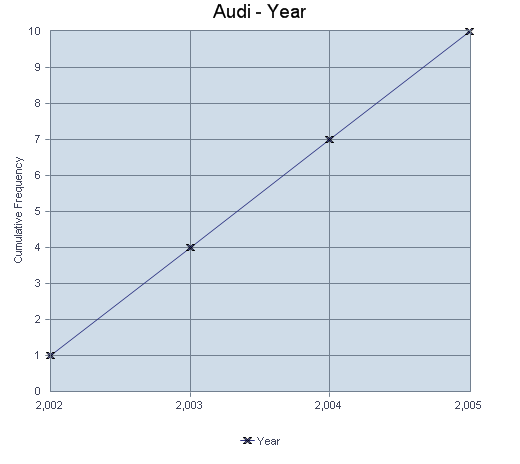 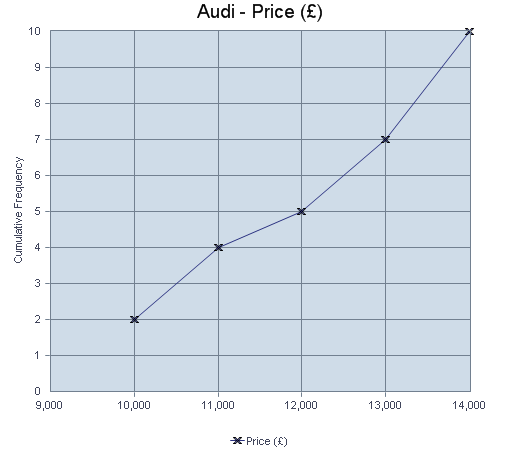 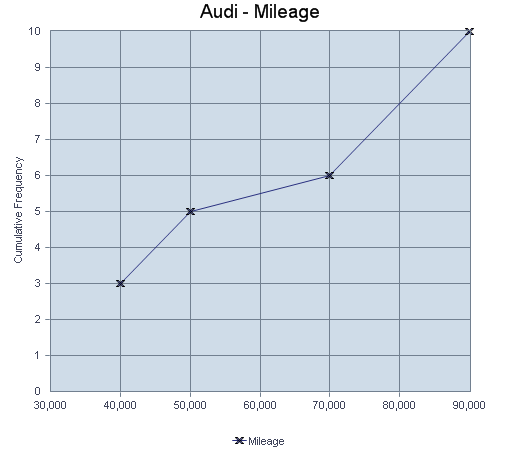 For my project, I think my sample size was too small. I could’ve went to a different car company that’ has a bigger amount of cars for me to use. If I used more cars for my project, my results are likely to be more accurate. Also, I could’ve got a bigger range of cars because the prices of cars of my data are quite low. I could’ve got a very expensive type of car and see how much that decreases compared to a cheaper car. Furthermore, I could’ve got data on a vintage car which the price increases as the age increases. This would’ve shown a big difference compared to the cars that I’ve done, therefore, the results I obtained in this project should not be used to estimate prices of other cars. It should be used for the type of car I used or a car in the price range that I used.

To improve my project, I could expand it by using data on different cars with a higher price and a lower price. I could also collect data on vintage cars to use for my project.