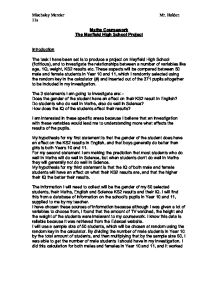 The 3 statements I am going to investigate are: -Does the gender of the student have an affect on their KS2 result in English?Do students who do well in Maths, also do well in Science?How does the IQ of the students affect their results?

The task I have been set is to produce a project on Mayfield High School (fictitious), and to investigate the relationships between a number of variables like age, 1Q, weight, KS2 results etc. These aspects will be compared between 50 male and female students in Year 10 and 11, which I randomly selected using the random key in the calculator (#) and inserted out of the 371 pupils altogether to be included in my investigation.

The 3 statements I am going to investigate are: -

Does the gender of the student have an affect on their KS2 result in English?

How does the IQ of the students affect their results?

I am interested in these specific areas because I believe that an investigation with these variables would lead me to understanding more what affects the results of the pupils.

My hypothesis for my first statement is that the gender of the student does have an affect on the KS2 results in English, and that boys generally do better than girls is both Years 10 and 11.

My hypothesis for my third statement is that the IQ of both male and female students will have an affect on what their KS2 results are, and that the higher their IQ the better their results.

The information I will need to collect will be the gender of my 50 selected students, their Maths, English and Science KS2 results and their IQ.

But what can’t be said in general is that students who achieve highly in Maths do the same for Science (e.g. Hannah).

Looking at the results of all four graphs and the comparisons I have made, I have discovered that my hypothesis is correct for boys in Year 10 at least. Also I have seen that altogether, out of the 16 students that got Level 5 (or higher) in either Maths or Science, 12 of them achieved the same grade in Science. So in that sense also my hypothesis is correct.

I have concluded the investigation of my second hypothesis, and will move onto my third and final one.

I will go about investigating this by using scatter graphs to compare the IQ of the students to the mean level achieved in KS2 (adding the results of Maths, English and Science and diving the sum by 3. Then round up the sum if needed).

I will again divide the students, and analyse first the boys and then the girls.

I went about a similar process for my other two hypotheses, although my second one was not correct. I had predicted that students who do well in Maths will also do well in

Science, but after an extent of analytical depth I could clearly see and prove that I was not right.

I am happy with the two out of three correct hypotheses and content that they are reliable as the methods I used showed both mathematical and visual proof that they were correct. Also by the analysing of girls and boys separately within the investigation I was able to see a clear difference between the two genders and if for example my second hypothesis, “Students who do well in Maths will also do well in Science” was true for one but not for the other, I would have been able to recognise this, in effect strengthening my investigation.

I am glad that one of my hypotheses was incorrect in a sense, because it proves that my methods were reliable, as I was able to see evidently that it was wrong and therefore able to justify why.

If I were to do this investigation again there would be more I could do to improve it however. I could extend my research by using other methods such as box and whisker, along side standard deviation as justification of correct statements. I could also have included other variables from the given handout, as there were several I left out in my investigation, as they were not need. I could have included things like the amount of TV watched, and compared it to the students IQ, seeing if there was any correlation.