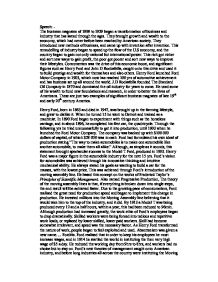 The business magnates of 1898 to 1929 began a transformation of business and industry that has lasted through the ages.

Speech: - The business magnates of 1898 to 1929 began a transformation of business and industry that has lasted through the ages. They brought growth and wealth to the economy, which had never before been reached by American society. They introduced new methods of business, and came up with invention after invention. This remodelling of industry began to speed up the flow of the U.S economy, and the country began to gain not only national but international power. This rich got richer and sort new ways to gain profit, the poor got poorer and sort new ways to improve their lifestyles. Consumerism was the drive of this economic boost, and significant figures such as Henry Ford and John D Rockafella, caught onto this drive and used it to build prestige and wealth for themselves and also others. Henry Ford launched Ford Motor Company in 1903, which now has reached 100 yrs of automotive achievement and has business set up all around the world. J.D Rockafella founded The Standard Oil Company in 1870 and dominated the oil industry for years to come. He used some of his wealth to fund new foundations and research, in order to better the lives of Americans. ...read more.

By 1913 a Model T was being produced every 12 and a half hours, within a year, this had been reduced to 96min. Although production had increased greatly, the work ethic of Ford's employees began to drop dramatically. Skilled workers were being forced into tedious and repetitive work loads, or replaced by lower skilled, lower paid workers. Skill had become somewhat irrelevant, and speed was the necessary factor. As Henry Ford transformed the nature of work, people began to feel exploited and used. Absenteeism was given a new name.... Forditis. Ford realised that in order to keep his employees he must increase wages, and in 1914 he startled the world in instituting the then very high wage of $5 a day. He reduced the working day from 9hrs to 8hrs, and workers had no choice but to stay on. Ford's new theories of management caught onto American industry, and before long industries all across the country were instituting the Moving Assembly line. Mass Production brought enormous wealth to industries and workers alike, as assembly line workers were paid up to 5 times the amount of everyday American workers. Nothing contributed more to the economic boom of the 1920's than Ford and the automotive industry. ...read more.

In 1911, the U.S Supreme Court found the Standard oil trust to be in violation of the anti-trust laws and ordered the dissolution of the corporation and the separation of its 38 companies. Since he was young, Rockafella had been giving away a share of his income. He once wrote, "I believe it is every man's religious duty to get all he can honestly and to give all he can." Up until his death in 1937, he continued to give back to the nation, through forming boards, foundations, charities and research centres, all focused on bettering the lives of Americans and helping the less fortunate. In turn this strengthens U.S economy, by bettering living conditions. Rockafella's domination of the oil industry brought amazing growth to the industry and boosted the profits of the petroleum business. These well-respected businessmen brought great change to the American industries, and have forever transformed the American business world with new theories and inventions. In doing so they gained great wealth, and in gaining great wealth they strengthened the U.S economy. 1898 to 1929 was a great time of change and improvement, brought about by significant figures such as Ford and Rockafella. The nation of America will forever be in their debt. ...read more.