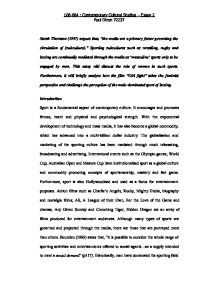 The media are a primary factor governing the circulation of subculture

Sarah Thornton (1997) argues that, “the media are a primary factor governing the circulation of [subculture].” Sporting subcultures such as wrestling, rugby and boxing are continually mediated through the media as ‘masculine’ sports only to be engaged by men. This essay will discuss the role of women in such sports. Furthermore, it will briefly analyse how the film “Girl fight” takes the feminist perspective and challenge the perception of the male-dominated sport of boxing.

Sport is a fundamental aspect of contemporary culture. It encourages and promotes fitness, heath and physical and psychological strength. With the exponential development of technology and mass media, it has also become a global commodity, which has advanced into a multi-billion dollar industry. The globalisation and marketing of the sporting culture has been mediated through much telecasting, broadcasting and advertising. International events such as the Olympic games, World Cup, Australian Open and Masters Cup have institutionalised sport as a global culture and commodity promoting concepts of sportsmanship, mastery and fair game. Furthermore, sport is also Hollywoodised and used as a focus for entertainment purposes. Action films such as Charlie’s Angels, Rocky, Mighty Ducks, biography and nostalgia films; Ali, A League of their Own, For the Love of the Game and dramas; Any Given Sunday and Crouching Tiger, Hidden Dragon are an array of films produced for entertainment audiences. Although many types of sports are governed and projected through the media, there are those that are portrayed more than others. Bourdieu (1993)

Muhammad Ali’s introduction into the ring in the 1960’s brought about much controversy in his political opinions. He was a renowned fighter but refused to support America’s involvement in the war. He created an anti-war lobby, which the NYSAC (New York State Athletic Commission) temporarily stripped of his boxing license. “An environment which brought together media money, showmanship, corruption and machiavellian political infighting was made for a man like Don King” (Sugden, 1996:45). ‘The King’ was the next regainer of the world championship, and then came Mike Tyson.

Taking this historical perspective, we can construe a subculture created by the medium of mass media of the boxing ring. The boxing ring is a site of physical and psychological aggression between two men. Initially, it was only a white man’s sport tied into the lower social class and involved the ‘underground’ culture of gambling. Its popularity and media coverage of the Sullivan-Corbett fight initiated a symbolism of American modernism and inspired significance during the First World War. The extinguishing of the colour bar initiated the involvement of black and ethnic contenders who became heavyweight champions and iconic role models. The legalisation of boxing and the huge endorsements by organizations created and mediated media’s trajectory of the sport. Hence, now we only see men participating in the sport of boxing, which has become dominant cultural knowledge. But not only does media televise boxing as male-dominated, there are also signifiers of masculine ideologies which females are not regarded to engage in.

‘Masculinity’ and the role of women in boxing