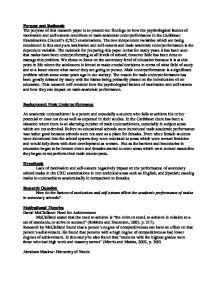 The purpose of this research paper is to present our findings on how the psychological factors of motivation and self-esteem contribute to male academic underperformance in the Caribbean Examinations Council’s (CXC) examinations. The two independent variables which are being considered in this study are motivation and self-esteem and male academic underperformance is the dependent variable. The rationale for preparing this paper is that for many years it has been seen that males have been underperforming at all levels of school; however little has been done to manage this problem. We chose to focus on the secondary level of education because it is at this point in life where the adolescent is forced to make crucial decisions in terms of what field of study and to a lesser extent what career they are going to pursue. Male underperformance is a significant problem which arose some years ago in our society. The reason for male underperformance has been greatly debated by many with the blame being primarily placed on the introduction of co-education. This research will consider how the psychological factors of motivation and self esteem and how they can impact on male academic performance.

An academic underachiever is a person and especially a student who fails to achieve his or her potential or does not do as well as expected in their studies. In the Caribbean there has been a situation where there is an alarming number of male underachievers, especially in subject areas which are not technical. Before co-educational schools were introduced male academic performance was rather good because schools were not seen as a place for females.

An analysis of the statistics gathered from the Ministry of Education on CXC performance during the May/June examinations for the years 2000-2005 correlate with the results from the survey. These statistics show that during these years under assessment males have been performing well in subjects such as technical drawing, wood work, physics, visual arts, mathematics and information technology. However, their performance in subjects such as English Language and Spanish has been below that of females.

Considering Victor Vroom’s theory of expectancy it has been found that underperformance of males in the CXC examinations occurs due to the fact that males do not see the importance and attractiveness of good results in these examinations therefore they do not give the necessary effort which is required to have a noteworthy performance in the examinations. It has been assumed that the needs and goals of males differ from the needs and goals which could be satisfied by good academic performance. It was deduced from the results of the survey that males see subjects such as technical drawing and mechanics as worthwhile however they are not always given the opportunity to take these subjects. Taking McClelland needs theory into consideration it can also be assumed that males are being outperformed by females due to the fact that they do not have a high drive to excel in the majority of the subjects which are offered at the CXC level. Their need to achieve lies in the subject areas previously discussed as technical but there are not that many technical subjects offered by the CXC.  It may be assumed male underperformance in secondary schools does not depend on co-educational schools or single sex schools.

Are males underperforming in Primary, Secondary or Tertiary school?

Does self esteem contribute to underperformance?

Are males being greatly outperformed? * In Primary, Secondary or Tertiary school?