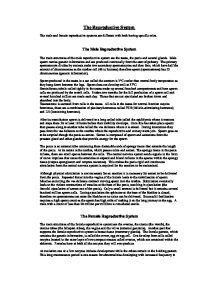 The Reproductive System - The male and female reproductive systems are different with both having specific roles.

The male and female reproductive systems are different with both having specific roles.

The main structures of the male reproductive system are the testes, the penis and several glands.  Male sperm carries genetic information and are produced continually from the start of puberty.  The primary spermatocyte divides by meiosis make two secondary spermatocytes and then four, which have half the amount of chromosomes as the mother cell (46 in humans) therefore sperm (spermatozoa) has 23 chromosomes (genetic information).

Sperm produced in the testes in a sac called the scrotum is 3°C cooler than normal body temperature as they hang down between the legs.  Sperm does not develop well at 37°C.

Seminiferous tubule coiled tightly in the testes make up several hundred compartments and here sperm cells are produced by the sertoli cells.  It takes two months for the full production of a sperm cell and several hundred million are made each day.  Those that are not ejaculated are broken down and absorbed into the body.

Although physical stimulation is not necessary for an erection it is necessary for semen to be delivered from the penis.  Repeated thrust into the vagina of the female leads to the mobilisation of sperm.  Muscles encircling the vas deferens contract moving sperm into the urethra.  Stimulation eventually leads to the violent contractions of muscles at the base of the penis, resulting in ejaculation (the forceful ejaculation of semen out of the penis).  Only a small amount is delivered but it contains several hundred million sperm cells.  During ejaculation the sphincter at the base of the bladder is closed, therefore no spermatozoa can enter the bladder or no urine can be delivered.  Successful fertilisation requires a high sperm count as the sperm has high odds of making it on the long journey to the egg.  A male with a count of less than 20 million per millilitre is considered sterile.

Once the sperm has fertilised the egg high in the fallopian tube it still makes the journey into the uterus and attaches itself to the lining.  Once this has taken place many tissues swing into action driven by hormonal signals getting the woman’s body ready, including her womb, to house, nourish and protect the developing foetus.  A key structure, which forms from the conceptus, is the placenta, the lifeline between mother and offspring.  Through this organ the foetus gains all its needs and disposes of all its waste.  Extensive changes occur in almost all of the systems in a woman’s body during pregnancy.

If conception does not occur preparations, in the form of a series of changes each month, are abandoned.  The materials that are produced each month are scrapped and a fresh cycle begins, preparing again for conception. This regular sequence is termed the menstrual cycle because of the discharge of fluid (menses) occurring via the vagina at regular intervals.  The events of this cycle are divided into four stages: -

Phase 3, which is mid cycle, is the time that the ovum is released from the ovary (this is what is known as ovulation).