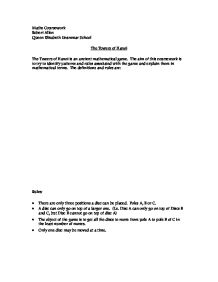 The Towers of Hanoi is an ancient mathematical game. The aim of this coursework is to try to identify patterns and rules associated with the game and explain them in mathematical terms.

The Towers of Hanoi is an ancient mathematical game.  The aim of this coursework is to try to identify patterns and rules associated with the game and explain them in mathematical terms.  The definitions and rules are:

When I look again, I can see that the pattern is the previous term doubled plus 1.  This can be expressed mathematically as:

This can be shown in:

From the coding, I can also see that the pattern of moves for 2 discs is present in the beginning of 3 discs, 4 discs etc.  The pattern for 3 discs is also in the pattern for 4 discs and so on.  This is can therefore be explained as:

In n number of discs where n is greater than 2, the first three moves will always be ABA.  This is because the n-1 discs pattern is included in the n pattern.  We have

We have the 2 term because this pattern is repeated twice, firstly to deconstruct the tower and then to rebuild the tower on top of the bottom disc.

We have the +1 term because this is where the bottom disc moves from Pole A to Poles B or C.  This can be demonstrated when we move three tiles.

From formula A I now have a basis on which to work.  Given a certain number of discs I need to be able to say how many times a desired disc moves.

Firstly, I need to analyze my results from the coding.

When I had 4 discs however, I noticed that the pile finished on where I did not place tile A which was Pole B.

This can therefore be expressed as:

If the number of discs in the pile to start with is even then the bottom disc will land where you place Disc A to start off with.

If the number of discs in the pile is odd however, then the bottom disc in the pile will finish up on the pole where you did not place Disk A.

According to the monks in Hanoi, the world will end in over 500 Million Years.

The problems with my investigation:

I have realized that there are only 26 letters in the alphabet.  With my system of labeling, it is impractical for me to label each disc A, B C etc because I will run out of letters.  I will either have to name the poles ABC or call each disc past 26, A1 etc.