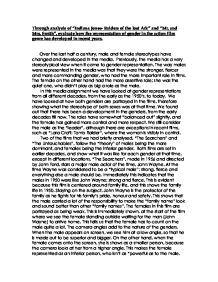 Through analysis of &quot;Indiana Jones- Raiders of the lost Ark&quot; and &quot;Mr. and Mrs. Smith&quot;, evaluate how the representation of gender in the action film genre has developed in recent years.

Through analysis of “Indiana Jones- Raiders of the lost Ark” and “Mr. and Mrs. Smith”, evaluate how the representation of gender in the action film genre has developed in recent years.

Over the last half a century, male and female stereotypes have changed and developed in the media.  Previously, the media has a very stereotypical view when it came to gender representation. The way males were represented in the media was that they were the stronger, fiercer and more commanding gender, who had the more important role in films. The female on the other hand had the more assertive role; she was the quiet one, who didn’t play as big a role as the male.

In this media assignment we have looked at gender representations from all different decades, from the early as the 1950’s, to today.  We have looked at how both genders are portrayed in the films, therefore showing what the stereotype of both sexes was at that time. We found out that there has been a development in the genders, from the early decades till now. The roles have somewhat “balanced out” slightly, and the female has gained more control and more respect. We still consider the male as the “leader”, although there are exceptions in recent films, such as “Lara Croft: Tomb Raider”, where the woman is visibly in control.

Two of the films that we had briefly analysed, “The Searchers” and “The Untouchables”, follow the “theory” of males being the more dominant, and females being the inferior gender.  Both films are set in earlier decades, and show what it was like for each gender at that time, except in different locations. “The Searchers”, made in 1956 and directed by John Ford, stars a major male actor of the time, John Wayne.

The first film, “Indiana Jones- Raiders of the lost Ark” was made in 1981 and was directed by Steven Spielberg. The films main character is a male, who is Indiana Jones (Played by Harrison Ford), and the female is an actor who has never actually been in a major film before, and she is called Miriam. This leaves Indiana Jones in the spotlight even before the film starts; therefore he is the protagonist of the film. The antagonists of the film are the Germans, as they try to stop Jones from succeeding.

We first see Indiana Jones as a silhouette, with his trademark hat and whip. The camera is at a low angle (low angle shot), giving the impression of superiority. The lighting on him is very dark, and you can only see the surrounding environment. This is the mis-en-scene. Before we see Jones though, the camera pans and follows the characters through the forest; there are non-deigetic sounds being made; these are animal sounds to add to the jungle theme. The characters here seem very afraid with what is happening, unlike Jones, who (when we eventually see him) is very focused on the task, and doesn’t seem the slightest bit distracted.For example when we first see him he is straight into battle with somebody who had tried to ambush him. This shows he is a very physical man, and he isn’t afraid of much. The build up to seeing Jones’ and watching him fight gains the interest of the audience because the suspense that was sustained there would of captured the audience’s attention, and there is still much more mystery to be discovered in the film, which the audience would of figured out.

The female stores her weapons in the kitchen, in the oven, which is very stereotypical. The weapons she has also indicate stereotyping, as she has a various number of knifes and small guns, which suggests she is more of the quiet type, apposed to the male who is very action-packed.

In conclusion to this film, “Mr. and Mrs. Smith” is a very equal-roled film, with the two different genders getting equal parts. Although this is the case, it doesn’t mean stereotyping doesn’t take place. In fact, I believe that it takes part in the film quite a lot, as both the personalities and the features were there because of the genders.

Overall to the question “Through analysis of “Indiana Jones- Raiders of the lost Ark” and “Mr. and Mrs. Smith”, evaluate how the representation of gender in the action film genre has developed in recent years”, I think that the gender representation has changed dramatically in both sexes, as the male seems to of lost his dominancy, and the female seems to be more powerful now. The searches showed us what the stereotypes were at the start; that being the male being the dominant force, with the female sitting back. “The Untouchables” backed this up. But as the years went on the stereotypes changed. In “Indiana Jones- Raiders of the lost Ark”, we saw a step up in ferocity in the females character, although the male was still the dominating factor of the film. But the biggest change was in “Mr. and Mrs. Smith”, as the roles were equal and the characters were both doing things their own way, not afraid of anything. My only query is that all the films we analysed were produced by males; if a female had produced them, would the stereotypes be any different?