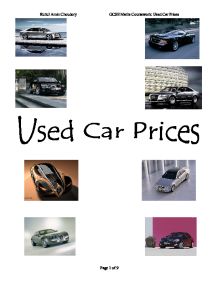 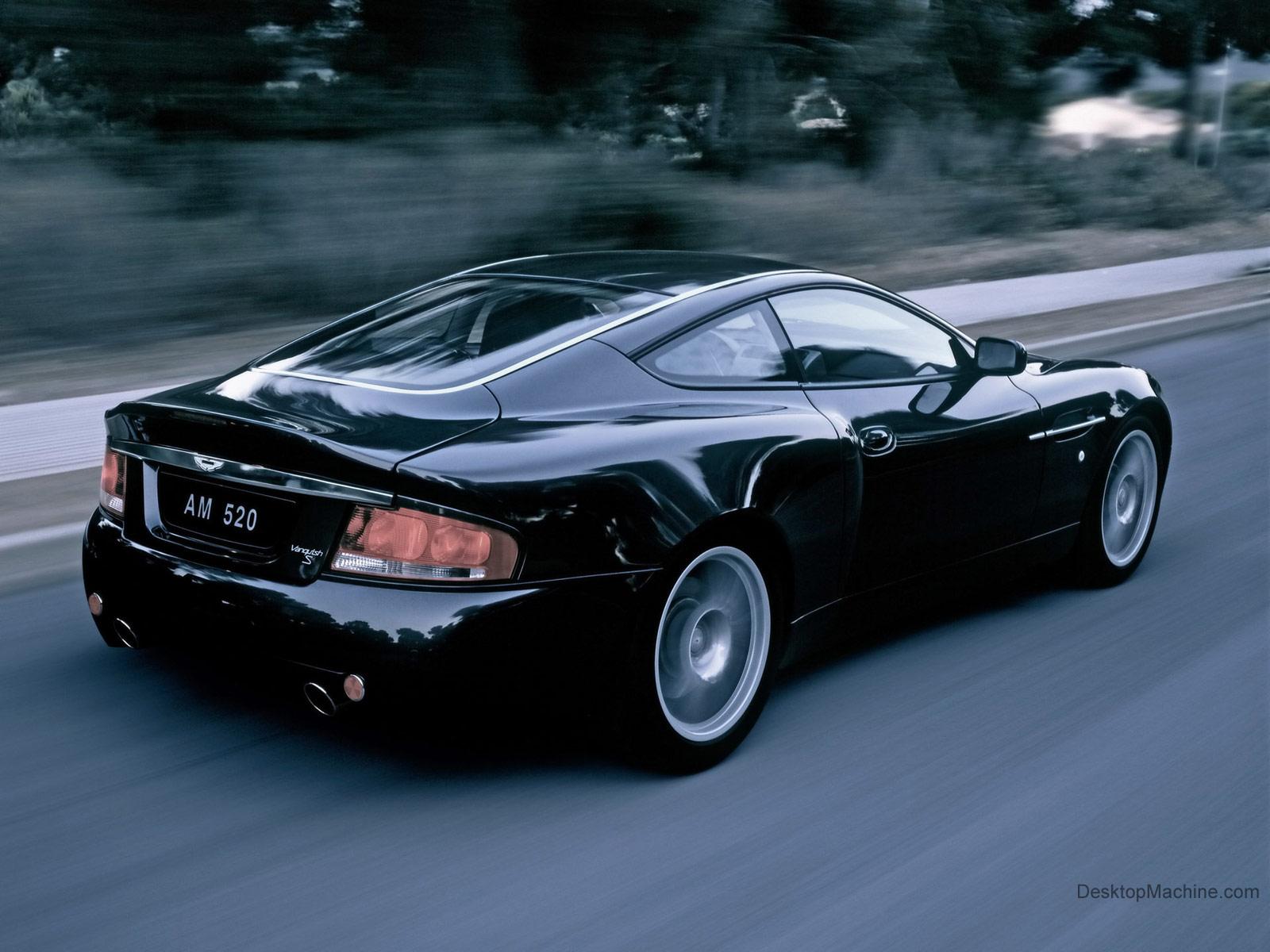 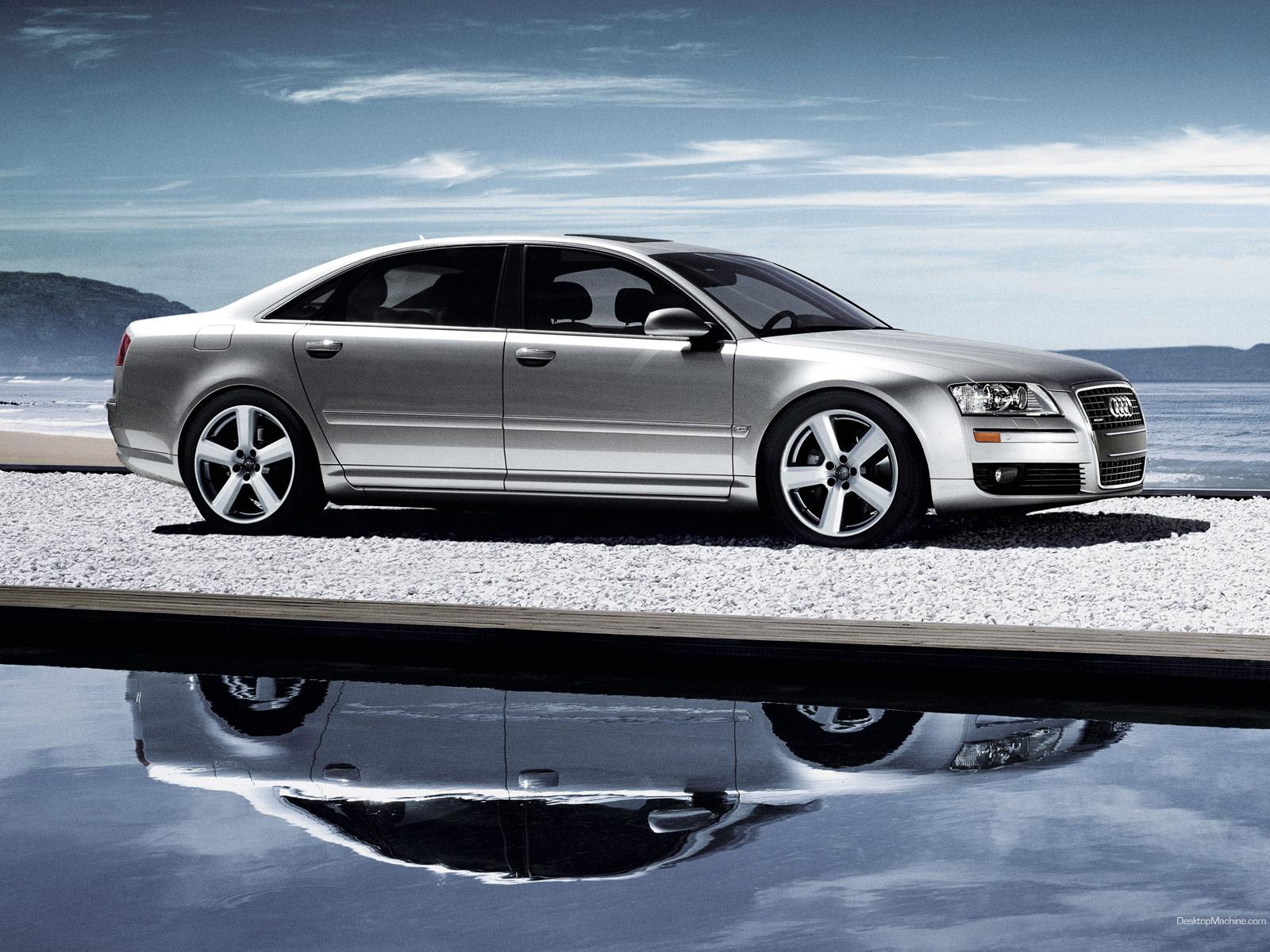 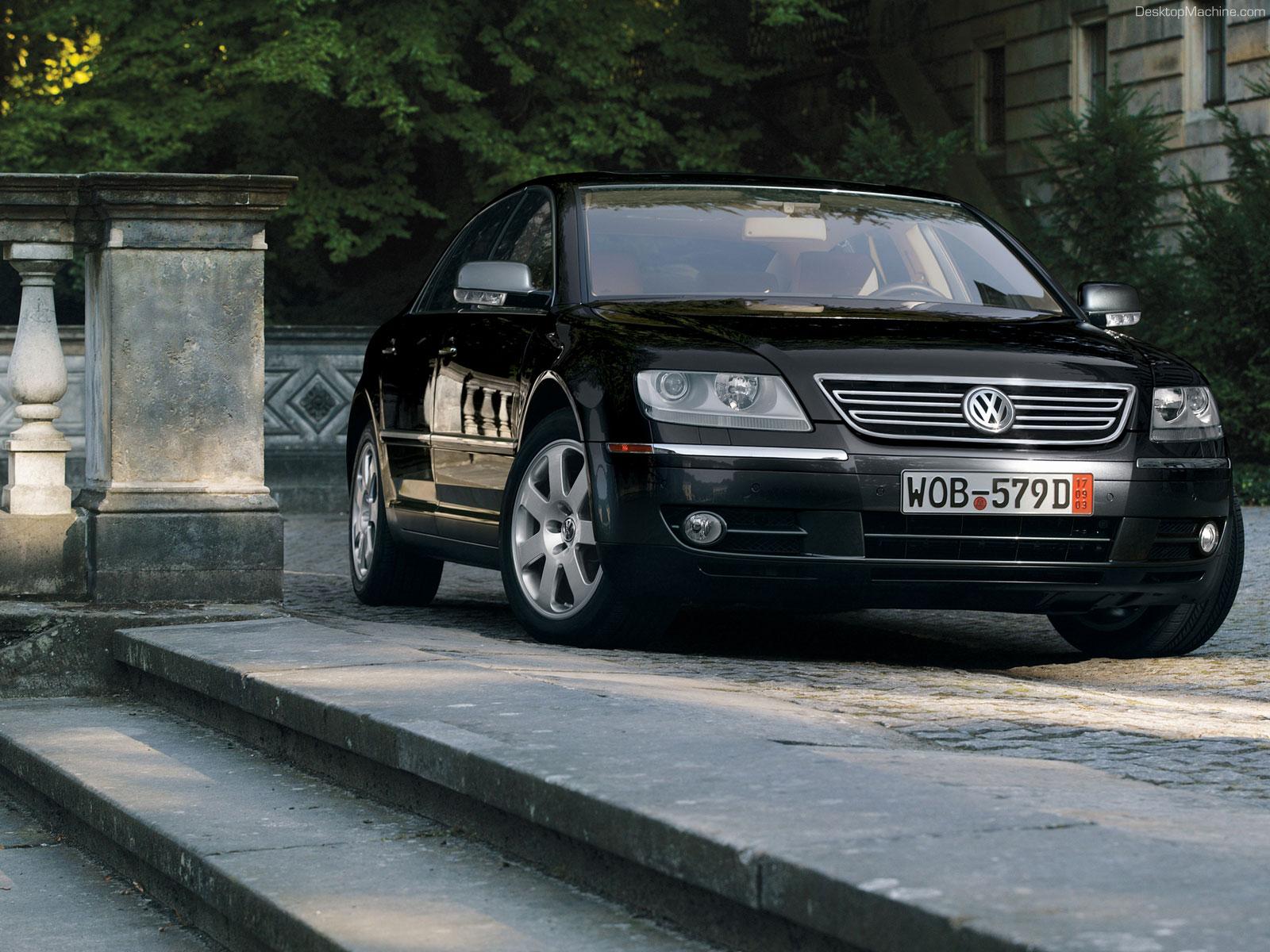 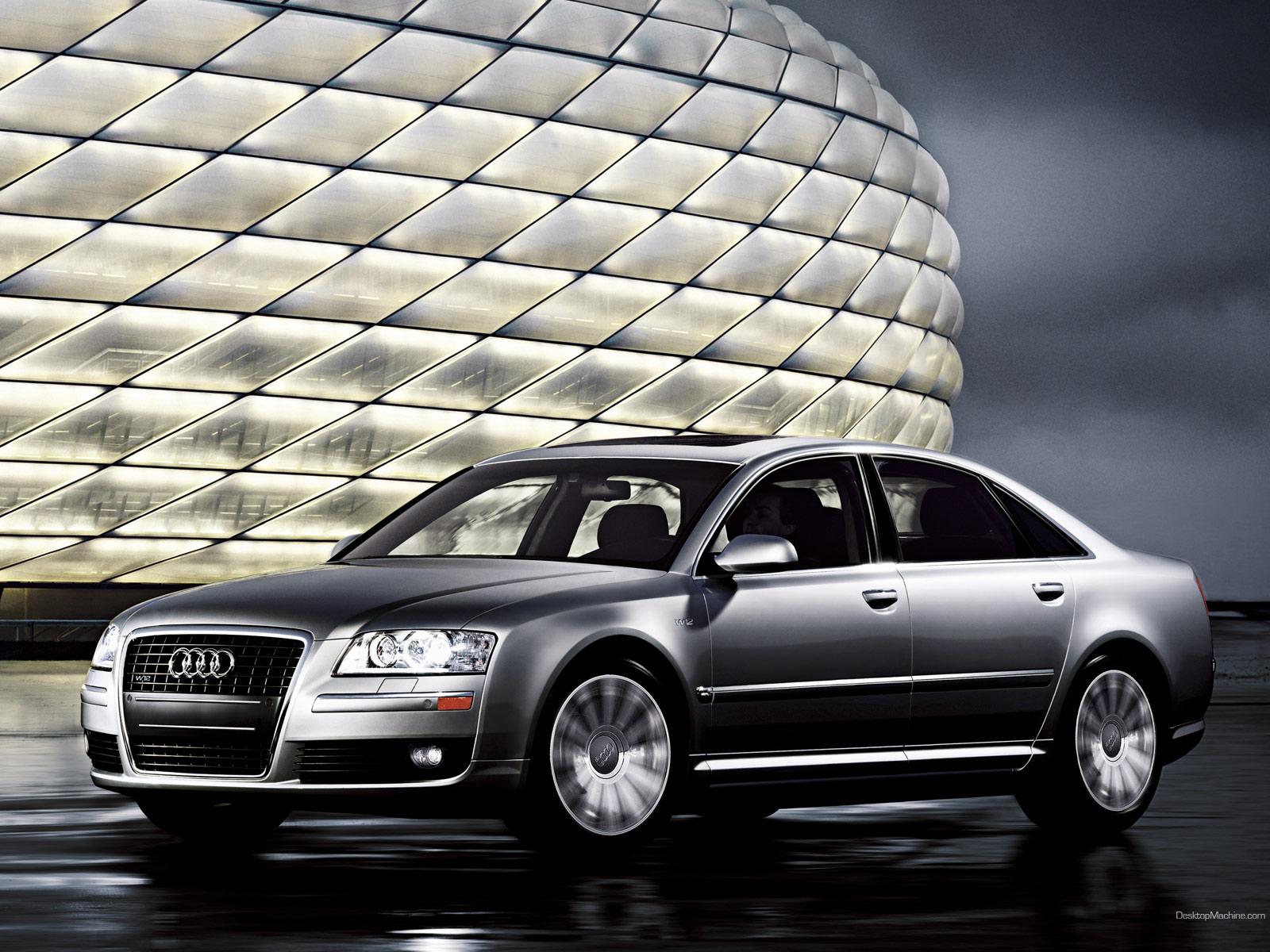 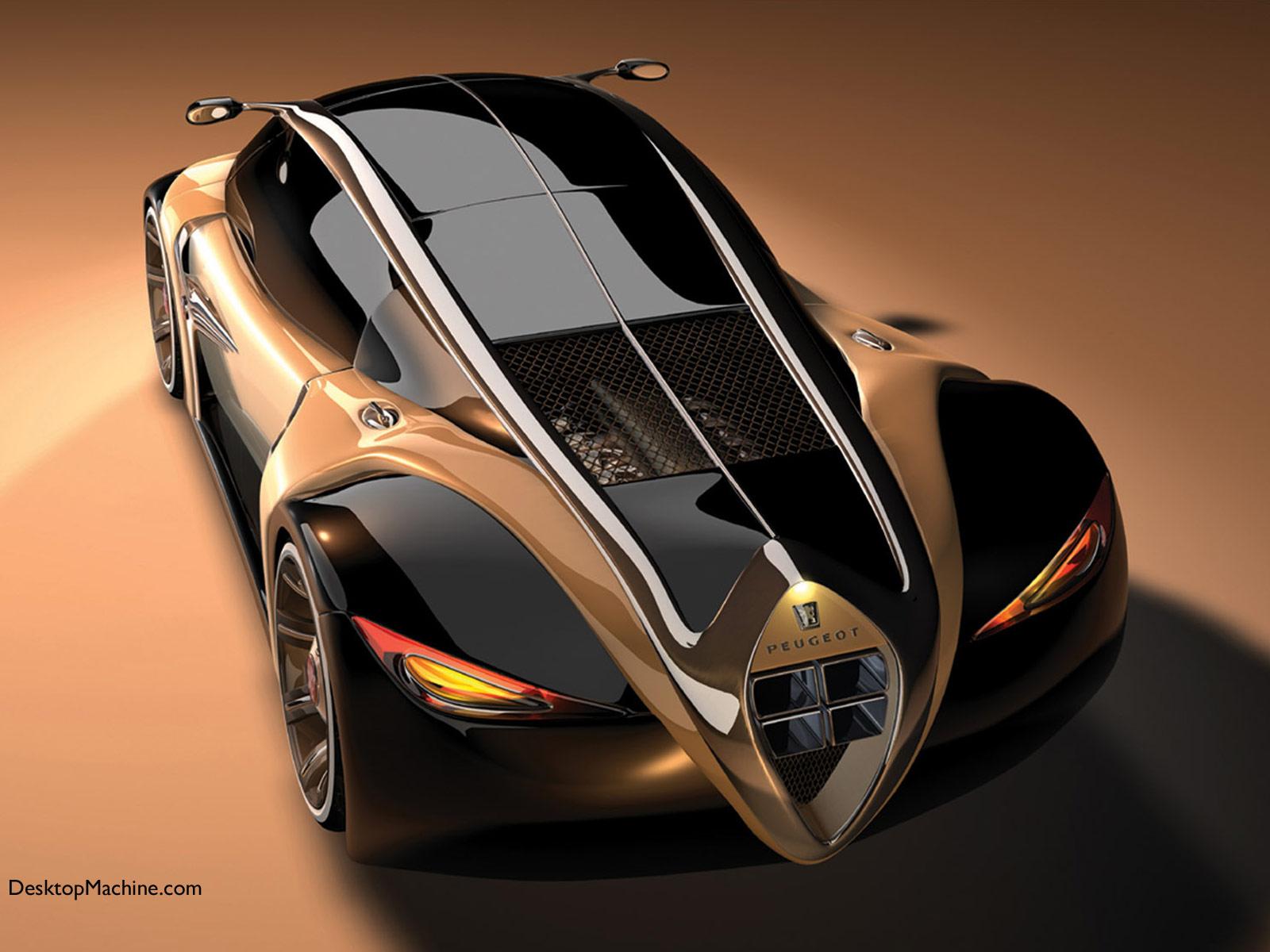 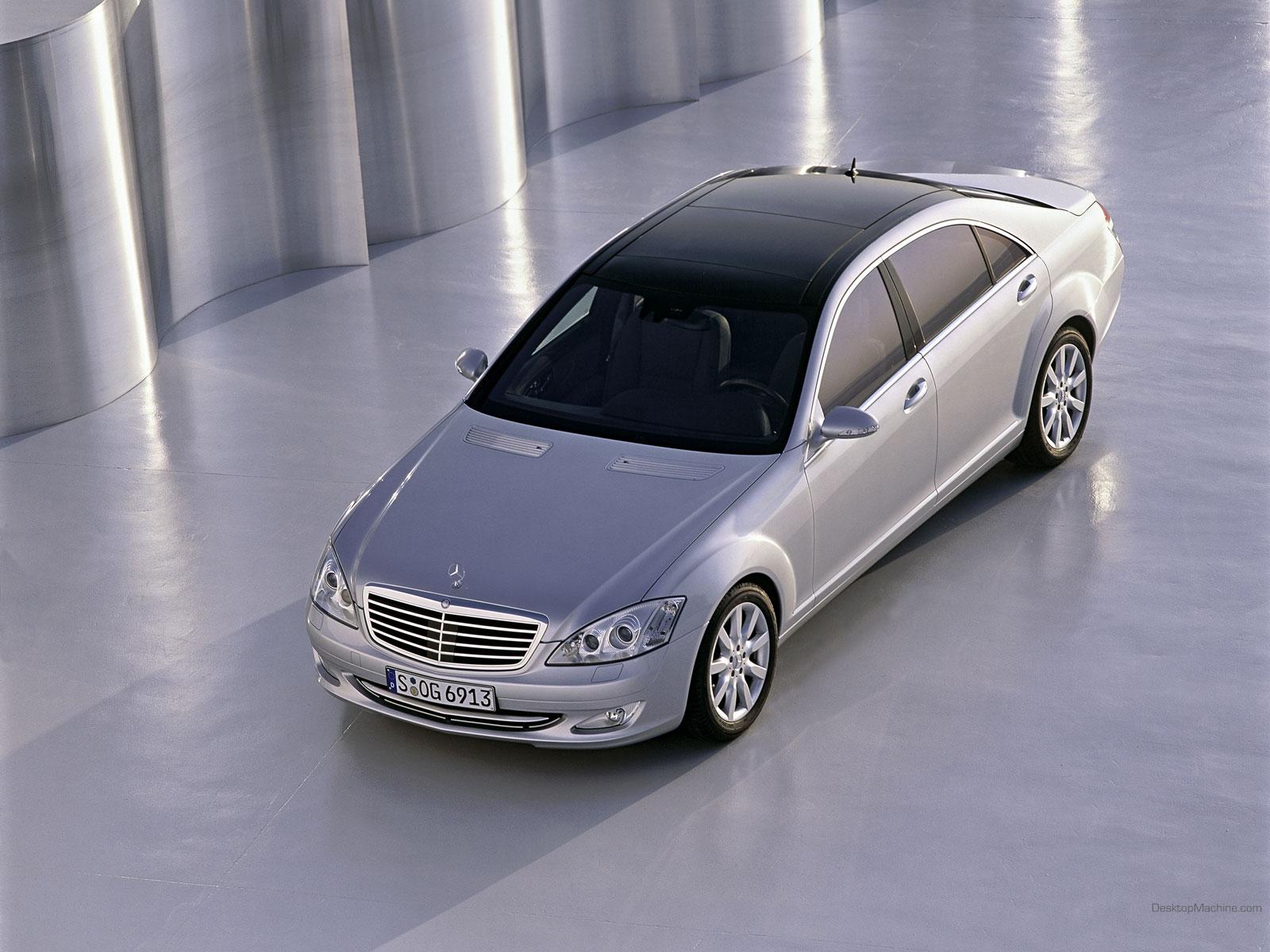 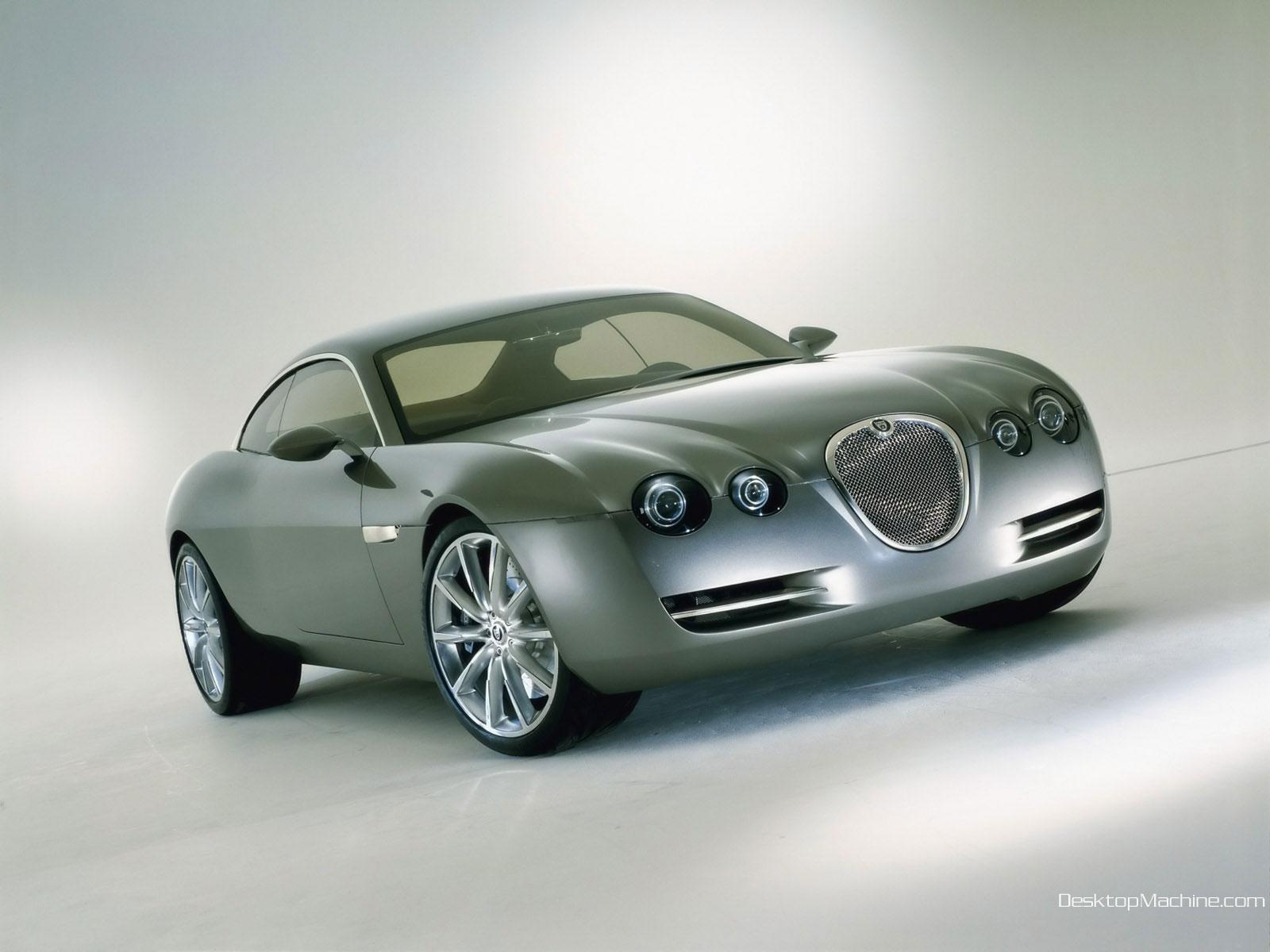 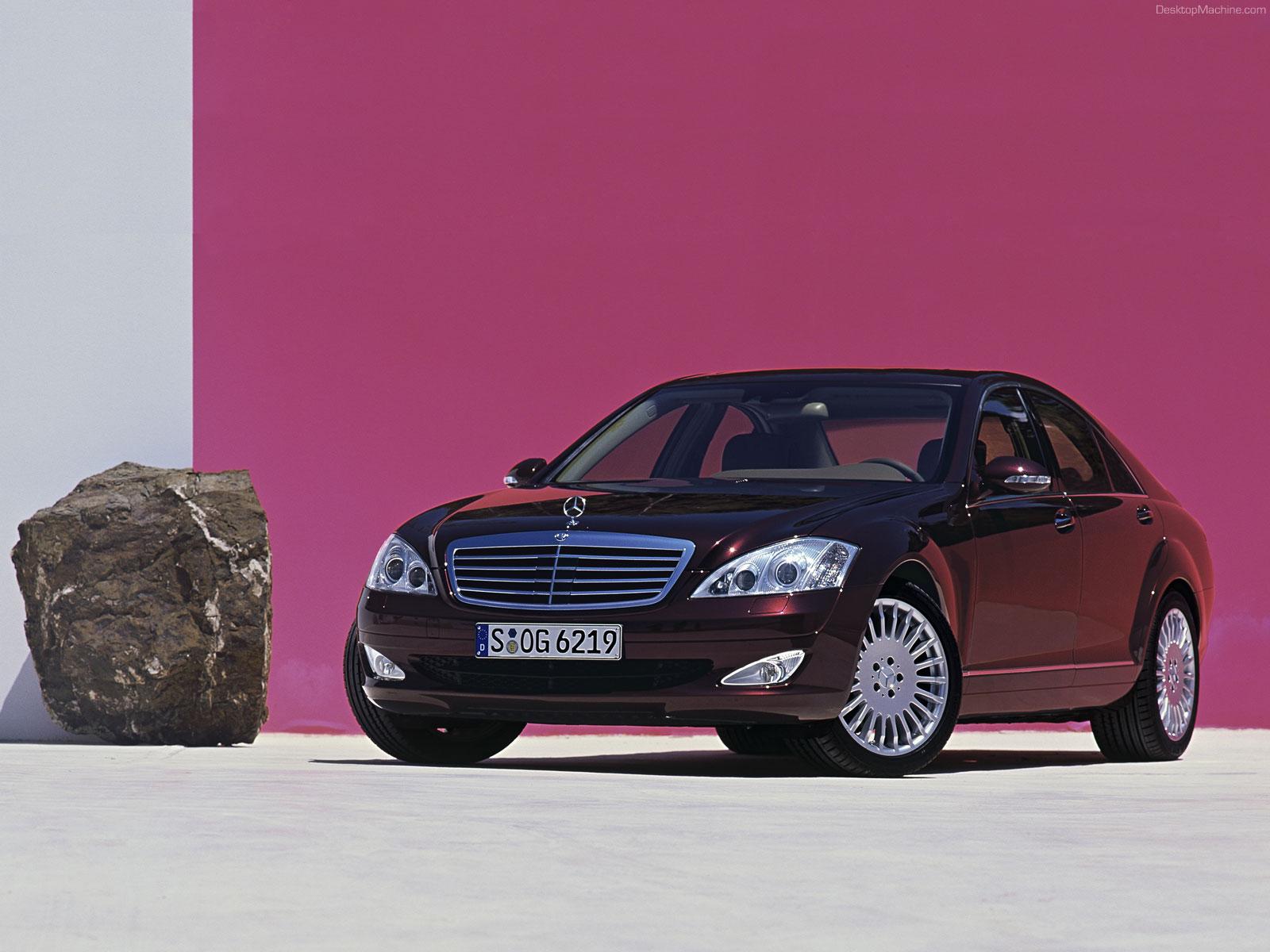 In this coursework, investigation will be held on the factors that affect the prices of cars. The data, which will be used, has been collected from the internet. I restricted my source to internet, because if I were to look through magazines & newspapers I would have to go through quite a hassle collecting data; where as in the internet I can search for cars with specific specifications done with minor effect.

As new cars are in demand, in business terms, car manufacturers are making a lot of money. These new cars are brought and customers usually get tired of the car or some needs are not met from the car or because of financial reasons, they decide to sell the car. Now at this point, it is not possible to sell the car at the price bought. So therefore price needs to be decreased from the original price. In this case, all the factors that affect car prices will need to be taken in to account and a fair price is later judged accordingly.

The factors that I shall investigate upon are age and mileage. For age, I have chosen to use 10 Renault Clio and 10 Vauxhall Corsa.

Already, it is seen that ‘the older the car, the cheaper a car will cost’ as I have said in my hypothesis.  The ‘Difference (£)’ column increases from the one before.

From these data, I will try and produce a graph from which I could be able to spot patterns and colorations and make further analysis. 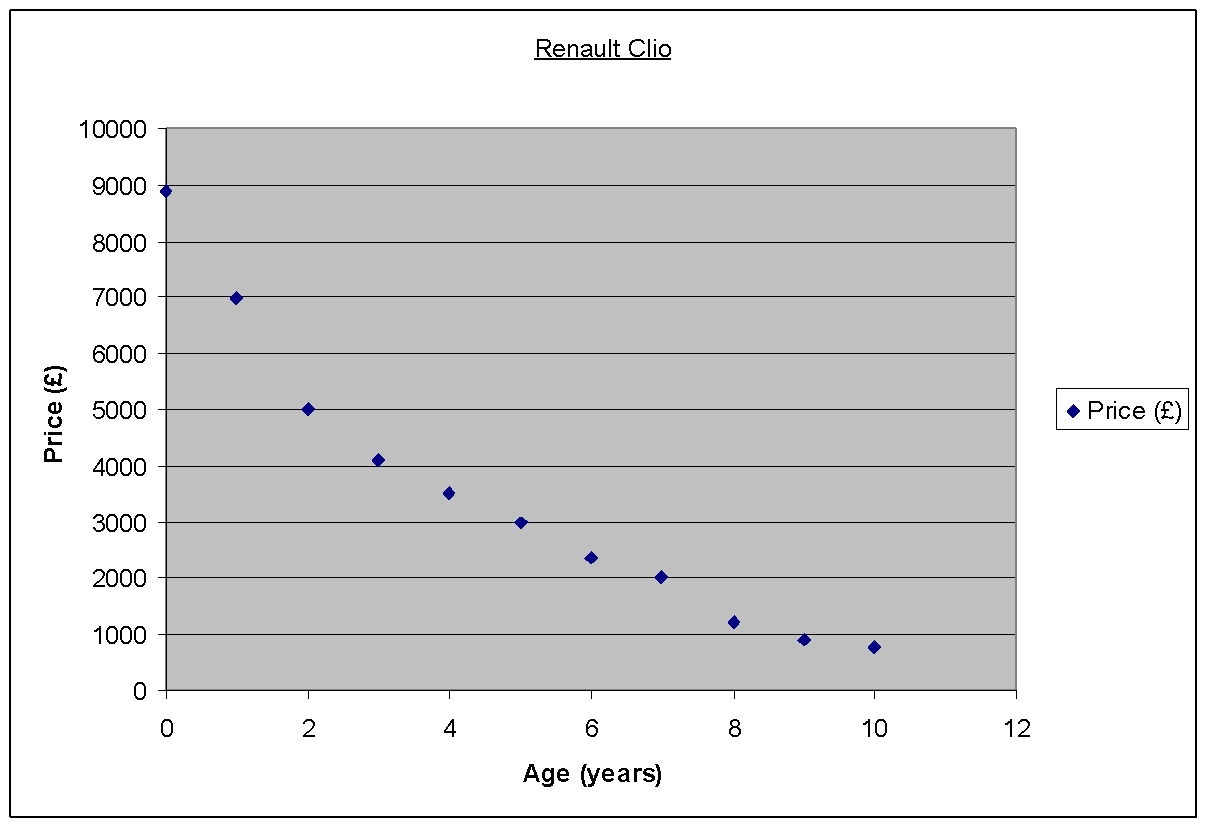 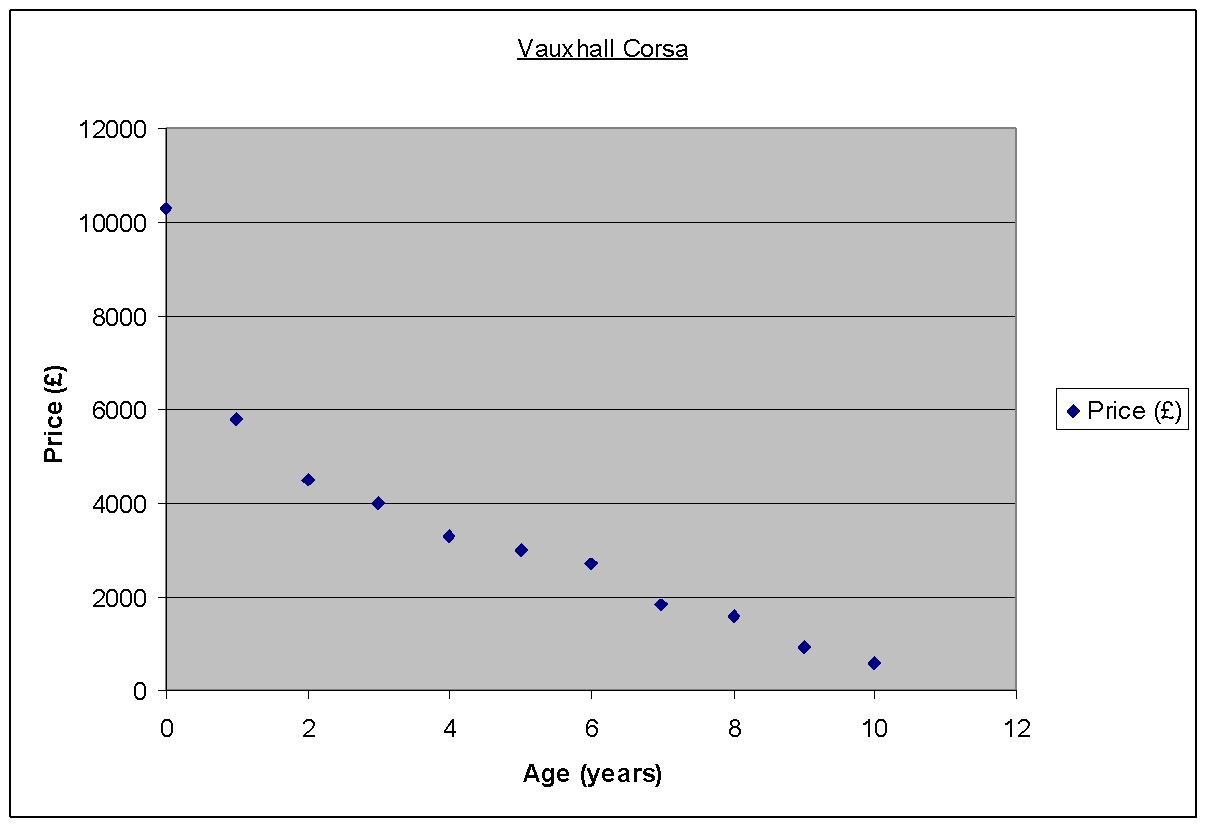 For both the cars, a decrease in price can be seen as the age increases. For Renault Clio, there is a very high decrease in the price in the first 2 years; from then on a gradual slope is formed meaning that price began to drop gradually. As for the Vauxhall Corsa, there is an outstanding drop of the price in the first year; after that a gradual slope can be seen which also means that the price began to drop gradually. The graph for Renault Clio shows that, a car could have been used the most in the first two years and as it is new, it will give excellent performance and thus be driven a lot.

My hypotheses was correct that ‘as the age increases, the price will decrease,’ but this hypothesis can be thought wrong by many, as they will think that there is an exact amount of drop in price as the car gets older. This should be made clear that, the rate of the drop is determined by the car itself. If the car has attained a high mileage or it has few dents here and there or etc. this will also affect the car price also.

Now to go on investigating further, I shall find out the percentage of the drop from the original price. 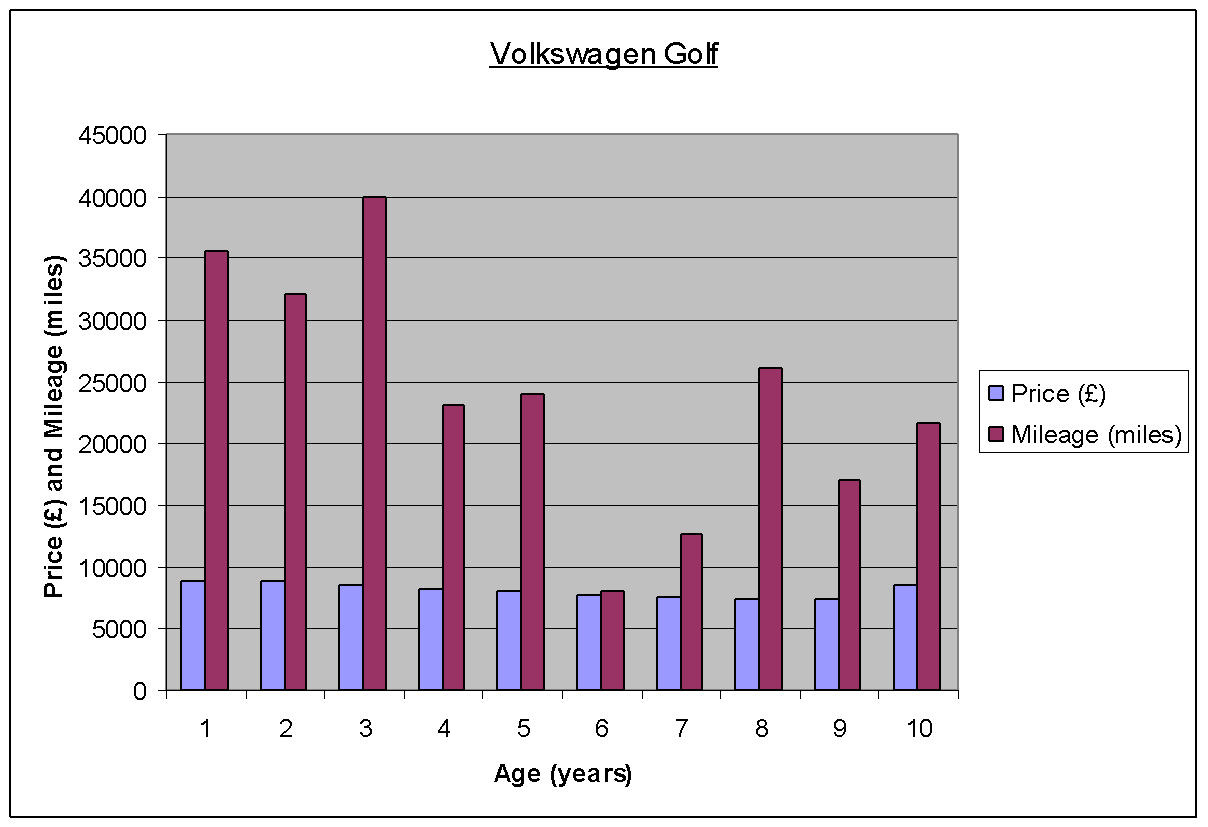 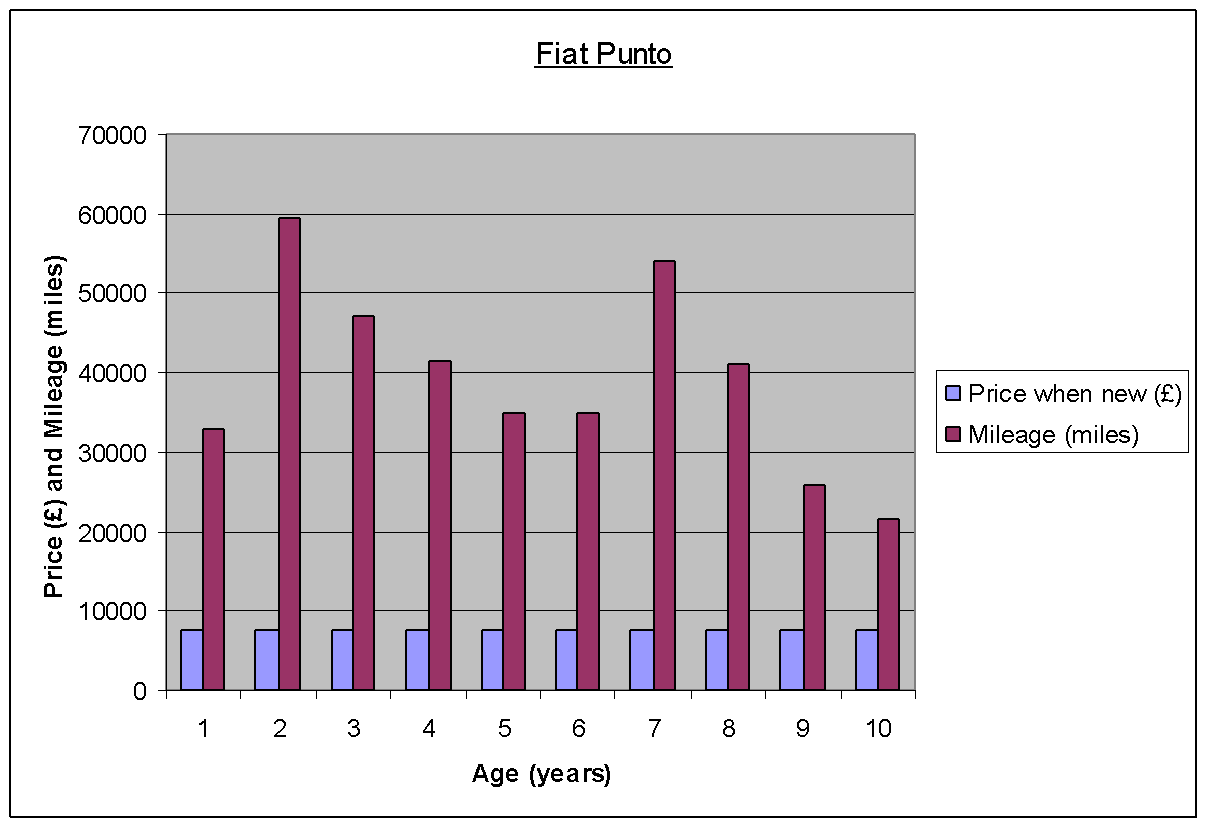 From this we can conclude that, mileage does not affect a car price and that my hypothesis was wrong.

During this investigation I have learnt many things to do with trading of cars such as; mileage, age of cars affecting the price etc. All these will be useful as a day will  come when I actually buy a car and due to this investigation, I shall be a better observer in cars.

Overall I think I have done O.K in this investigation abd I think improvements could have been made. My hypothesis of the factor Age was correct but it was wrong for the factor mileage. By doing further investigation, it has helped me to find out if I was correct or incorrect with the hypotheses.