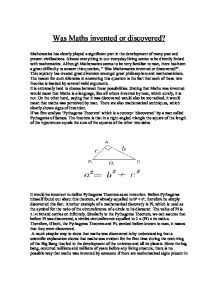 Was Maths invented or discovered?

Was Maths invented or discovered?

Mathematics has clearly played a significant part in the development of many past and present civilisations. Almost everything in our everyday living seems to be directly linked with mathematics. Although Mathematics seems to be very familiar to man, there has been a great difficulty to answer this question, “ Was Mathematics invented or discovered?”. This mystery has created great diversion amongst great philosophers and mathematicians. The reason for such dilemma in answering this question is the fact that each of these two theories is backed by several valid arguments.

It is extremely hard to choose between these possibilities. Stating that Maths was invented would mean that Maths is a language, like all others invented by man, which surely, it is not. On the other hand, saying that it was discovered would also be too radical, it would mean that maths was perceived by man. There are also mathematical techniques, which clearly shows signs of invention.

If we first analyse ‘Pythagoras Theorem’ which is a concept ‘discovered’ by a man called Pythagoras of Samos.

On the other hand there are inventions in the world of Maths. Firstly, the way in which mathematics is expressed to us, was invented. Mathematical symbols (such as +/-), didn’t exist hundreds of years ago, they were expressed in different ways, or maybe not expressed at all, but the concept of adding and subtracting existed. 1 + 1 = 2, thousands of years ago would mean absolutely nothing to man at that time, know a days it is known to most habitants of this planet. Along the past years a language was invented so that mathematical thoughts and concepts could be expressed.

In order to simplify an answer to all that was said, another question must be asked besides the original one, ‘ Was the language of maths invented or discovered’. Mathematics was almost entirely discovered, of course there were few exceptions of inventions based on its discovery, while the language of maths it totally discovered by man. The creation of this language helped us to express an abstract nature of mathematics, in a practical way, which allows us nowadays to use maths as a powerful instrument in order to build new and improved civilisations for the future.