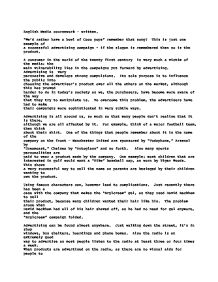 English Media coursework - written. "We'd rather have a bowl of Coco pops" remember that song? This is just one example of a successful advertising campaign - if the slogan is remembered then so is the product. A consumer in the world of the twenty first century is very much a victim of the media; the main vulnerability lies in the campaigns put forward by advertising. Advertising is very persuasive and develops strong compulsions. Its sole purpose is to influence the public into choosing the advertiser's product over all the others on the market, although this has proved harder to do in today's society as we, the purchasers, have become more aware of the way that they try to manipulate us. To overcome this problem, the advertisers have had to make their campaigns more sophisticated in very subtle ways. Advertising is all around us, so much so that many people don't realise that it is there, although we are all affected by it. For example, think of a major football team, then think about their shirt. One of the things that people remember about it is the name of the company on the front - Manchester United are sponsored by "Vodaphone," Arsenal by "Dreamcast," Chelsea by "Autoglass" and so forth. Also many sports personalities are paid to wear a product made by the company. One example: most children that are interested in golf would want a "Nike" baseball cap, as worn by Tiger Woods. This shows a very successful way to sell the name as parents are besieged by their children wanting to own the product. Using famous characters can, however lead to complications. Just recently there has been a case with the company that makes the "Brylcreem" gel, as they used David Beckham to sell their product, because many children wanted their hair like his. The problem arose when David Beckham had all of his hair shaved off, as he had no need for gel anymore, and the "Brylcreem" campaign folded. ...read more.

There are many points to back up the fact that there is a difference in the age for the target audience. In the "Orange Tango" adverts, they were very childish, and the best way to explain the "Blackcurrant Tango" adverts would be patriotic; which is associated more with adults. The advert put forward an aggressive, powerful and almost jingoistic image. They did this by the dramatic change in mood throughout the advert. At the start of the advert it is a very calm scene with Ray Gardner, the spokesperson for Tango in his office reading a letter from a foreign exchange student called Sebastien Loyes, who has said he did not enjoy "Blackcurrant Tango" as much as previous flavours. The fact that Ray Gardner uses his full name shows he is showing some respect towards the boy, although his attitude towards him varies wildly towards the end of the advert. Gardner then goes on to say that he can only apologize to the boy, as if he is wrong. He comments that they have done all they can to provide "satisfaction for all Tango drinkers, even if you're only visiting our great nation," the way that he added "great nation" into his speech shows he is starting to become slightly patriotic. The use of "you're only visiting" also implies the 'foreigner' is inferior to the British people. This starts to change the tone of the advert. Ray Gardner says later on in the advert "you're an exchange student aren't you Sebastien?" There is a definite change in the tone of his voice at this point. He becomes more aggressive, and becomes fairly insulting by stereotyping the French as "all hair gel and fancy loafers." By this time Ray Gardner has begun to remove his clothes revealing that he is wearing a pair of purple boxing shorts. He has also moved from the office to outside in the car park. ...read more.

I think that overall our advertising campaign would be quite successful, as it is very colourful and bold so it would be noticed. Similar products on the market are "Impulse" body sprays. These also create different images with different bottles of spray, but as our perfume consists of five different flavors in one bottle, it is more versatile than the "Impulse" sprays. The "Impulse" campaign also focused on the effect the perfume would have on the men nearby, whilst our product would effect the wearer, making them feel good about themselves. I feel that after studying advertising for quite some time I have learnt quite a lot from it. Before we looked at this topic I didn't know how manipulative advertisers can be, and I was very much a victim of their campaigns. I have been taught to decode the adverts and understand the way in which the advertisers persuade us into buying the product. Taking a poster advert as an example, there has been a lot of time and effort put into the advert and nothing is there by accident. Every aspect of the poster has been thought through and has a reason for being there. For example, - the writing - how big or small it is, how much there is, what colour and font its in is all designed to give maximum impact. The position of the writing, the language used, and the use of slogans have all been carefully planned. The models - old or young, big or small, male or female, famous or not, they have been chosen so that they appeal to a very specific audience. The background or setting - where and why, glamorous or uninviting, busy or sparse, all this is designed to give a particular message. For a poster briefly glimpsed from the top of a bus or for a thirty second commercial between T.V programmes, there has been a lot of thought, time and effort by a huge team put into producing it. By Kate Kirwan, 10 Lystra. ...read more.