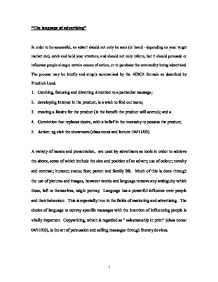 "The language of advertising" In order to be successful, an advert should not only be seen (or heard - depending on your target market etc), catch and hold your attention, and should not only inform, but it should persuade or influence people along a certain course of action, or to purchase the commodity being advertised. The process may be briefly and simply summarised by the AIDCA formula as described by Friedrich Lund: 1. Catching, focusing and diverting Attention to a particular message; 2. developing Interest in the product, ie a wish to find out more; 3. creating a Desire for the product (ie the benefit the product will accrue); and a 4. Conviction that replaces desire, with a belief in the necessity to possess the product; 5. Action: eg visit the showroom (class notes and lecture: 04/11/03). A variety of means and presentation, are used by advertisers as tools in order to achieve the above, some of which include the size and position of an advert; use of colour; novelty and contrast; humour; status; fear; parent and family life. Much of this is done through the use of pictures and images, however words and language remove any ambiguity which these, left to themselves, might portray. ...read more.

Research of a number of local (Dungarvan, County Waterford) and national newspapers and their advertisements, over the past few months, a few of which are highlighted below, illustrates a number of the advertising techniques which have been observed. Property advertisements I have noted that generally, most property advertising of new housing estates, is done by using an artist's impression of the new/proposed, development. Whilst this is practically feasible, it must be pointed out that these graphic representations are intended to represent the idyll and set out to do exactly that through the imagery used - see appendix 2 (Tournore Court) at the rear of this assignment. These images are then supported and their message enforced through the wording used on the advert - eg "Make the Right Move, Choose Tournore Court, Dungarvan. The very first word of this statement sets out to convince and persuade the potential purchaser to initiate/take a course of action. The following words, " the Right Move", is an appeal to a person's general tendency and desire to want to do the "right thing", and is intended to convey the impression that purchasing a house in this development (as opposed to any other in another development, and as highlighted by the word "Choose") ...read more.

and marketing activities and materials (some of which have been listed already), and through which legal recourse may be obtained should any person consider themselves to have been misled by any advertisement. It is therefore considered that introducing further legislation, simply to regulate property (which may be regarded in the same light as any other consumable commodity), would serve no purpose, and merely duplicate what legislation etc already exists. As has been highlighted above, a major element of advertising are the words used to attract attention, describe the product, and persuade potential purchasers to buy. However, as alluded to in the assignment topic, the way advertising can use words can often be described as less than ethical. Although it is illegal for advertising to lie, the way it can tell the truth, through the use of connotations, fuzzy rather than concrete words, logical fallacies, and careful choice of language roots, creates illusions, delusions, and the belief that advertisements are saying one thing when in fact they are saying something totally different, if indeed they are saying anything at all. This is neither good nor bad; it is advertising doing its job, selling products under extreme restrictions in time, space, and lack of immediacy. However, knowing how advertising uses language makes it possible for the average consumer to make better, more informed purchase decisions. ...read more.