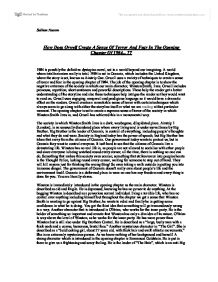 How Does Orwell Create A Sense Of Terror And Fear In The Opening Chapter Of 1984... ?? 1984 is possibly the definitive dystopian novel, set in a world beyond our imagining. A world where totalitarianism really is total. 1984 is set in Oceania, which includes the United Kingdom, where the story is set, known as Airstrip One. Orwell uses a variety of techniques to create a sense of terror and fear in the opening chapter of 1984. The job of the opening chapter is to show the negative extremes of the society in which our main character, Winston Smith, lives. Orwell includes pronouns, repetition, short sentences and powerful descriptions. These help the reader get a better understanding of the storyline and also these techniques help intrigue the reader so they would want to read on. Orwell uses engaging, nonpareil and prodigious language so it would have a dramatic affect on the readers. Orwell creates a remarkable sense of terror with certain techniques which always seem to go along with either the storyline itself or what we are reading at that particular moment. The opening chapter is set to create a supreme sense of terror of the society in which Winston Smith lives in, and Orwell has achieved this in a monumental way. ...read more.

The citizens of Oceania are not allowed to think the wrong thoughts, do the wrong things, this is because when people start thinking they might start thinking about their own life and what is going on around them and they might come out with some analysing thoughts, according to Big Brother. But and eventually they could also want to rebel against Big Brother. The punishments for disobeying Big Brother are instant death, in a extraordinary way or being sent to a labour camp for quite a few years. To makes sure that no one steps put of hand, Big Brother has these tele-screens on, literally every single wall of Oceania, which can see and hear what you are doing, 24/7. People who do go against Big Brother, e.g Goldstein and Winston, are aware of these dreadful punishments, but are still takin the risk to go against Big Brother. And if having these tele-screens placed on every wall of Oceania is not enough, Big Brother also has The Thought Police, which are feared just as much as Big Brother himself. Knowing this people are tempted to definantly obey Big Brothers demanded rules. The punishments he puts to people are exceptionally scary, so people try to stay away from doing anything bad or anything that will put their lives in danger. ...read more.

Winston can't change anything, can't change anything unless... he opens his mind, and for once, starts to think... The image above is the front cover of 1984, straight away the reader can see what kind of book this will be, filled with emotion and consequences that can make them understand the character's feelings and maybe even make them experience what the character is going through. It also has the three slogans that Big Brother promote, but it is hard to understand that unless the reader has read the thrilling book and has a good idea of what those slogans are trying to say. The barbed wire and fences that demarcates how everyone is trapped in Big Brother's control. A different front cover of the same book. This cover specifies hoe the environment of Oceania would be like. The poster in the background says, "Big Brother Is Watching You." The poster is shown almost everywhere and seen as the poster seem to be staring at you, the eyes seem to follow you, it reminds the reader who the story is really based on, and who is in charge. Winston is also shown next to the "Bold Looking Girl," and the reader may be able to assume there is a rift between them as they are back-to-back. Subhan Naeem ...read more.