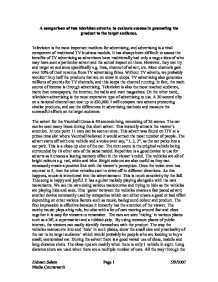 A comparison of two television adverts; to evaluate success in promoting the product to the target audience.

A comparison of two television adverts; to evaluate success in promoting the product to the target audience. Television is the most important medium for advertising, and advertising is a vital component of traditional TV business models. It has always been difficult to assess the benefits of TV advertising as advertisers have traditionally had only a vague idea of who may have seen a particular advert and the actual impact on them. However, they can try and target an audience specifically e.g. time, channel of advert, etc. Most channels gain over 50% of their revenue from TV advertising firms. Without TV adverts, we probably wouldn't buy half the products that are on show in shops. TV advertising also generates millions of pounds for TV channels, and this keeps the channel running. In fact, the main source of income is through advertising. Television is also the most reached audience, more than newspapers, the internet, the radio and even magazines. On the other hand, television advertising is the most expensive type of advertising to use. A 30 second clip on a national channel can cost up to �20,000. I will compare two adverts promoting similar products, and see the differences in advertising methods and measure the successful effects on its target audience. The advert for the Vauxhall Corsa is 40 seconds long, consisting of 26 scenes. ...read more.

During the advert there is a good varied use of close, middle and long-distance shots. The close-ups are mainly when there is only 1 vehicle in sight. Long distance shots are used when there are a multiple number of cars. All the way through the advert there are many sound effects including the original vehicle being driven on gravel. Also, there is a vehicle jumping into a rubbish skip which is full of rubbish, causing a sound. There is also the sound of a bell in a lift when the doors open revealing the car, once again creating familiarity with the audience. This emphasizes the small size of the car to its target audience. As the original car has counted up to 100 in the 'game' and starts to travel to find the others, another car is revealed from just behind a metal sheet off a building site. This leaves a comedic, lasting effect on the audience that helps them remember the advert after it's gone. As the advert finishes off with the word 'Corsa' and 'Vauxhall' the logo and website address are also displayed. The advert for the Volvo 850 T-5 is 39 seconds and is very different to the first advert. It uses different devices to promote the product as it has a different target audience and because it is a different vehicle. ...read more.

The background used is a sunset kissed American desert area which is suffering from a tornado. This instantly creates a dangerous atmosphere because of the music and the setting being used. In the advert we see 6 characters involved with either the vehicle or the tornado. However, to prolong the 'lasting effect' device, the characters are only shown for a second or two each. There are two characters who are seen screaming out at the tornado for a second each. Their clothes are being thrown around in the wind as they battle. There is then a shot of the Volvo swerving away from the oil rig, which emphasizes the strength of this new model. We can compare this to the Corsa advert which didn't have any people relating to the car, nor such a highly charged atmosphere. There are many special effects during the advert which enhances to create Volvo's specific atmosphere. Similarly, the Vauxhall also had special effects but not as extreme as the one's used in the Volvo advert. Overall the Corsa advert is very good as it uses numerous devices effectively to promote the product and it is very identifiable by the audience. The 850 T-5 advert is in unrealistic circumstances and has an American accent through it making it difficult for the viewers to picture themselves in that situation. For the U.K market the Vauxhall Corsa advert is effectively better then the Volvo 850 T-5 advert. ?? ?? ?? ?? Zishaan Salam Page 1 5/9/2007 Media Coursework ...read more.