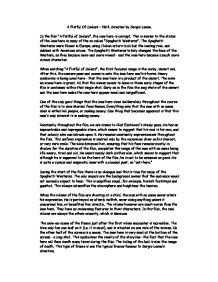 A Fistful Of Dollars - 1964, directed by Sergio Leone.

A Fistful Of Dollars - 1964, directed by Sergio Leone. In the film "A Fistful of Dollars", the lone hero is corrupt. This is similar to the status of the lone hero in many of the so-called "Spaghetti Westerns". The Spaghetti Westerns were filmed in Europe, using Italian actors in all but the leading role, and dubbed with American voices. The Spaghetti Westerns totally changed the face of the Western, as they became more and more violent - and the lone hero became a much more vicious character. When watching "A Fistful of Dollars", the first focused image is the rocky, desert soil. After this, the camera pans and zooms in onto the lone hero and his horse. Heavy symbolism is being used here - that the lone hero is a product of the desert. The mise-en-scene here is great. All that the viewer needs to know in these early stages of the film is contained within that single shot. ...read more.

He is quite a cynical and enigmatic loner with a clouded past; an "anti-hero." During the start of the film there is no dialogue and this is true for many of the Spaghetti Westerns. The only sounds are the background noises that the audience would not normally expect to hear. This is amplified sound, for example, horse's footsteps and gunshot. This silence intensifies the atmosphere and heightens the tension. When the villains of the film are shooting at a child, the man with no name never alters his expression. He is portrayed as utterly selfish, never doing anything unless it concerned him, or benefited him directly. The villains however are much worse than the lone hero. They have no redeeming features to their characters. In this film, the real villains are always the ethnic minority, which is Mexican. The mise-en-scene of the frame just after the first villain encounter is incredible. The tree only has one leaf on it (i.e. ...read more.

He is an American, but is wearing a Mexican poncho. This was done deliberately by Sergio Leone to make the lone hero look broader and stockier, thus making him appear, along with his tobacco, much tougher. In the Wild West, survival was the key, and morality came a second best. Both the Americans and the Mexicans shoot at the feet of the man with no name and the child. Anything that happened as a result of the hero getting rich was purely a by-product. When the hero meets the Mexican who gives him some advice, he is seen as very much taller than his "friend". The lone hero will always be the dominant character in the Spaghetti western, though he is the sometimes the underdog and not necessarily good. The statement in which Silvanito, the saloon owner, says, "Eating and drinking and Killing. That's all you can do, just like the rest of your kind," is a great statement because it tells us the truth - that the typical American traveller was interested in just that. ...read more.