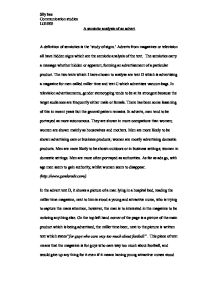 A semiotic analysis of an advert

A semiotic analysis of an advert A definition of semiotics is the 'study of signs.' Adverts from magazines or television all have hidden signs which are the semiotic analysis of the text. The semiotics carry a message whether hidden or apparent, forming an advertisement of a particular product. The two texts which I have chosen to analyse are text D which is advertising a magazine for men called miller time and text C which advertises vacuum bags. In television advertisements, gender stereotyping tends to be at its strongest because the target audiences are frequently either male or female. There has been some lessening of this in recent years but the general pattern remains. In adverts, men tend to be portrayed as more autonomous. They are shown in more occupations than women; women are shown mainly as housewives and mothers. Men are more likely to be shown advertising cars or business products; women are mostly advertising domestic products. Men are more likely to be shown outdoors or in business settings; women in domestic settings. Men are more often portrayed as authorities. As far as ads go, with age men seem to gain authority, whilst women seem to disappear. ...read more.

This advert is also very stereo typical as all men are shown to be in love with football, not all men are not necessarily the same, some men may even despise sports and not have an interest in football what so ever. Although the advertisers aim is to sell the miller time beer, they are advertising the miller time football magazine as they have a good idea that this would attract the male attention. The image and the text support each other as the text at the top of the page where it is written "for guys who care way to much about football " has an image of the young man who is reading the magazine in a hospital bed and cares way to much about what's inside the magazine rather than what is around him or who is stood next to him. In text C it is advertising vacuum bags, on the advert is a picture of a middle aged woman with her hands near her face and screaming, because of dust which gets everywhere, next to the women on left is large written text which states "dust clouds when I vacuum...dirt explosions when I change the bag, Its enough to make you scream" This quote is emphasising that all women get annoyed when they see dirt, which is very stereotypical to women. ...read more.

They are able to do this through the use of such tools as lighting, pace, background music and stereotypes. In the end it shows that s*x appeal and fast paced advertising sells for men because men tend to be the more aggressive gender. The gender stereotypes used in magazine of advertising make assumptions about men and women that may or may not be true. They are likely to be true of some men and some women but there will be very few people who fully conform to the magazine's neatly packaged feminine woman and masculine man. Readers today are more sophisticated than ever before and are likely to be aware that not all of a magazine's content does relates to their lives and likes. Adverts through out magazines, you can see that they focus on a certain gender or age group. This all depends on the type of magazine which is brought. When reading adverts it is very noticeable that advertisers use different stereotypes to focus in on these gender/age groups. For example, adverts aimed at men are usually fast paced and filled with action; where as adverts for women contain more feminine qualities. Family oriented advertisements sell for woman mainly because they tend to be the stereotyped keepers of the nest. Advertisers know this and it is the most powerful tool in the industry. (http://web.cwoc.ufl.edu/owl/archives/2003_01_01/messages/1294. ...read more.