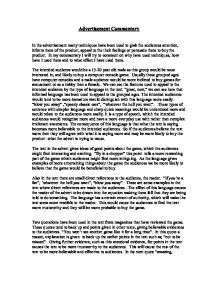 Advertisement Commentary In the advertisement many techniques have been used to grab the audiences attention, inform them of the product, appeal to the their feelings or persuade them to buy the product. In my commentary I will try to comment on why have used techniques, how have I used them and to what effect I have used them. The intended audience would be a 13-20 year old male as this group would be most interested in, and likely to buy a computer console game. Usually these grouped ages have computer consoles and a male audience would be more inclined to buy games for amusement or as a hobby than a female. We can see the features used to appeal to the intended audience by the type of language in the text. "great, new," we can see here that informal language has been used to appeal to the grouped ages. The intended audiences would tend to be more immature would distinguish with this language more easily. "blow you away" ,"speedy classic cars", "whatever the h**l you want". These types of sentence with simpler language and sharp quick meanings would be understood more and would relate to the audiences more easily. ...read more.

"BUY IT NOW!" is an emboldened, black, serif font style wording with a shadowed effect and in upper case. This wording style, font, makes it the most eye-catching and authoritative wording on the advert, giving it large impact on audiences. The font style with an exclamation mark has a demanding, commanding connotation, which appeals to audience's feelings. It causes audiences to feel that the text is credible and reliable which will make them consider what it is saying. It needs these effects because it is the most important point in the advert; it is what the advert is trying to make the reader do, buy the product. If the effect of the emboldening works it will cause audience to be more likely to buy the product. There is also a headline effect of this statement which includes a rhetorical question and dramatic feeling. The exclimation mark causes the dramatic effect which gives it a dra There are some emboldened texts, which try to use emboldening for modified effects. There is a slogan type text at the bottom of the advert that is also emboldened. It uses emboldening aswell as alliteration to make it eye-catching but also memorable. ...read more.

In the advert I have tried to cause the effects listed above and have achieved most but believe that some techniques could have been concentrated on more and given better effect. The colours used in the text although causing emotive connotations do not anchor or catch audience's eye. Some stronger more vibrant colours could have been used to give some texts or the advert layout a stronger more emotive impact. It could be a strong red to give a governing, more trustworthy anchoring effect to the text. Images have been used in the text to a good persuasive extent but I believe that some could have been enlarged to give the advert a more eye-catching effect enticing the audiences to read the rest of the text- anchoring the text. The logos also could have been enlarged to make the advert a more eye-catching and make the logo more memorable to give a stronger association with the product to the reader. Slogans in the advert and could have been concentrated on more; also to give a more memorable effect. Although I would change some things about the advert I believe I have created good texts, images, slogans, images and backgrounds to a good persuasive effect. ...read more.