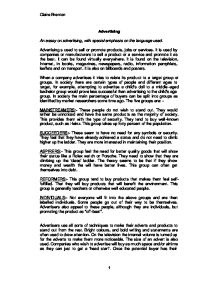 Advertising an Essay On Advertising, With Special Emphasis On the Language Used.

Advertising An essay on advertising, with special emphasis on the language used. Advertising s used to sell or promote products, jobs or services. It is used by companies or manufacturers to sell a product or a service and promote it as the best. It can be found virtually everywhere. It is found on the television, Internet, in books, magazines, newspapers, radio, information pamphlets, leaflets and on transport. It is also on billboards and posters. When a company advertises it tries to relate its product to a target group or groups. In society there are certain types of people and different ages to target, for example, attempting to advertise a child's doll to a middle-aged bachelor group would prove less successful than advertising to the child's age group. In society the main percentage of buyers can be split into groups as identified by market researchers some time ago. The five groups are:- MAINSTREAMERS:- These people do not wish to stand out. They would rather be unnoticed and have the same products as the majority of society. This provides them with the type of security. They tend to buy well-known product, such as Heinz. This group takes up forty percent of the population. SUCCEEDERS:- These seem to have no need for any symbols or security. They feel that they have already achieved a status and do not need to climb higher up the ladder. They are more interested in maintaining their position. ASPIRERS:- This group feel the need for better quality goods that will show their status like a Rolex watch or Porsche. They need to show that they are climbing up the 'class' ladder. The theory seems to be that if they show money and wealth the will have better lives. This group can often get themselves into debt. REFORMERS:- This group tend to buy products that makes them feel self-fulfilled. That they will buy products that will benefit the environment. ...read more.

Already this depicts money. The model is wearing a designer dress that implies wealth. In front of her is a bottle of perfume. Across the front of the picture there is writing saying 'Coco mademoiselle' imprinted in a black and white irregular typeface. This writing looks as if it has come from the 'punk' era. This promotes individuality, therefore implying the exclusiveness of the product. Also at the bottom is the writing ' a new fragrance from Chanel' which makes the product new and exciting. This advert plays on the pride of the reader as if she was to buy it she would have the same environment and image as the woman in the advert. SWAN HELLENIC Advert Another weakness appealed to is sloth. Sloth is usually used to advertise holidays for the mid thirties and upwards, although it is used to promote some foods for people who don't have much time like single parents. To promote products using sloth is a technique often found in magazines for holiday adverts. This advert is for a holiday company who offers to take you to the Mediterranean. The picture is of a building on a rock face in the late evening. On the top of the picture, in handwriting typeface is a description of the place and a witty ending. The language in the text uses a lot of descriptive words but non are harsh or out of place. The text tells a story of how hard it used to be to get to the building and ends in the change that has been made to get to the building by road. At the bottom of the picture it is has text telling us about the service. The language used seems to be purely 'business like' even though the offer is promoted as memorable. This advert promotes the product to mainstreamers for who cruises and package deal holidays are considered a 'normal and safe' option. ...read more.

People who like to think that they are helping the environment or are against scientific testing on animals will be attracted to words such as 'proven', 'tested', 'passed' or 'eco-friendly'. Language like this is usually associated with products from the cosmetic industry. These words don't mean anything. Even though it is illegal to lie or promote false information about their products, the scientific tests would be minimal and not tested on the right things. How do you know for sure what the tests are and which products have not been tested? The language, however, is very effective. Some products are promoted as the best by the language used. If this language is used broadly enough the potential customer will eventually start to believe it. Words like 'fabulous' and 'the best' are very convincing if used a lot. Also adverts will try to flatter the potential customers. The term 'for delicate skin like yours' can be flattering. For a part of you to be delicate implies that you will be fair, pretty and gracious if you use the product. This is not always true, but it works. Many adverts appeal to our human instincts and desires that need to be satisfied. The Heinz advert for some soup appeals to the human need to be warm and well fed. It showed a cold wet woman going home and eating the soup in a large comfy chair. She was warm and felt better. This would appeal to everyone. In our society, celebrities are often used to sell products. When we see a popular celebrity promoting a product we will immediately think that they obviously like it. They are so successful and popular and only want the best. We therefore think that we must have it too, as it must be good. Advertising is very big business. Vast amounts of money are invested in it to promote goods and services. If we are not to be tempted to buy goods that we do not really want or need, then it is vital that we understand the language used. ?? ?? ?? ?? Claire Brenton 1 ...read more.