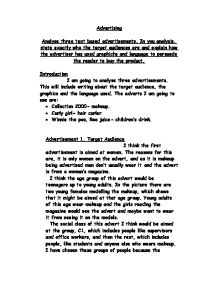 Advertising Analyse three text based advertisements. In you analysis, state exactly who the target audiences are and explain how the advertiser has used graphichs and language to persuede the reader to buy the product. Introduction I am going to analyse three advertisements. This will include writing about the target audience, the graphics and the language used. The adverts I am going to use are: * Collection 2000- makeup. * Curly girl- hair curler * Winnie the poo, Roo juice- children's drink. Advertisement 1, Target Audience I think the first advertisement is aimed at women. The reasons for this are, it is only women on the advert, and as it is makeup being advertised men don't usually wear it and the advert is from a woman's magazine. ...read more.

The makeup might also appeal to single people because they would want to look good, but not spend too much on doing that. Students may read this and will see the makeup, and the price; it is quite cheap but still looks good and fashionable, which would then appeal to trendy people. The models on the photograph are out and they look fashionable and look to be having a good time. The selling point of these products is the price, not a lot of adverts put the price on the advert, but as this is quite cheap it will appeal to lots of people. The slogan " Show some metal" gives the impression of how the makeup looks fashionable, as it is metallic. ...read more.

The use of clear outlines on the image are made by the two products being advertised, being made to stand out against the red background. This is also used on the text as it is white and shows well on the red background, and is clear to read but also quite small. Instant impact. The main image is of two ladies, who look to be out and having a good time. This is the first thing you see, but it doesn't make you look at the pictures of the products, as they are very small. The writing is also small, it would be better to make the text and photos of the products bigger and make the main image a b8it smaller. You would then be able to spot what is being advertised easier. ...read more.