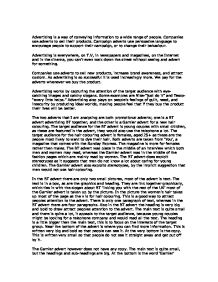 Advertising : BT together and Garnier

Advertising is a way of conveying information to a wide range of people. Companies use adverts to sell their products. Campaign adverts use persuasive language to encourage people to support their campaign, or to change their behaviour. Advertising is everywhere, on T.V, in newspapers and magazines, on the Internet and in the cinema, you can't even walk down the street without seeing and advert for something. Companies use adverts to sell new products, increase brand awareness, and attract custom. As advertising is so successful it is used increasingly more. We pay for the adverts whenever we buy the product. Advertising works by capturing the attention of the target audience with eye-catching images and catchy slogans. Some examples are Nike-"just do it" and Tesco- "every little helps." Advertising also plays on people's feelings of guilt, need, and insecurity by producing ideal worlds, making people feel that if they buy the product their lives will be better. The two adverts that I am analysing are both promotional adverts; one is a BT advert advertising BT together, and the other is a Garnier advert for a new hair colouring. The target audience for the BT advert is young couples with small children, as these are featured in the advert, they would also use the telephone a lot. ...read more.

Near the bottom of the advert is where you can find more information. This is written very big and bold so that people can see it. At the very bottom is the copy. This is written very small so that people do not see it straight away and get put off by it. The Garnier advert however does not have any copy. The main text is quite small, but the headings and sub-headings are big. At the bottom is the word 'Garnier' written very big and bold, because Garnier is such a well-known company, this helps to sell the product. In the foreground of the advert, is a picture of the product its self. This will help people if they want to buy the product as shows them what they are looking for. I think that the Garnier advert is more eye-catching as it has more colour. However the heading ' Free baby-sitting service from BT' on the BT advert would attract couples with small children as they are the sort of people who would be looking for a baby-sitter. In the Garnier advert, the picture is very effective as it is very big and will grab your attention. ...read more.

It does this through exploiting vulnerabilities and weaknesses'; creating an unattainable illusion of something that is never going to happen. I think that sometimes there is too much advertising, especially during films when you just want to watch the whole film without it being interrupted by adverts. However, in the UK, it is not as all pervading as in some countries, for example, in Canada, where the opening titles to a programme a shown, followed by a number of adverts, before the programme has even begun. There are some advantages to adverts; they give information, this is partially useful in campaign advertising, the may encourage a change in peoples behaviour (e.g., to stop drinking or to wear seat belts.) It is also productive when two companies are advertising a similar product as this may bring down prices for the consumer. Most adverts are enjoyable and some (like the Hovis advert with the little boy riding his bike down the lane) are memorable. The music that accompanies some adverts can also help to sell the product. However there are some disadvantages to adverts as they play on our vulnerabilities and encourage us to buy products we don't really need. Overall though I think that advertising is a very effective way of getting information to a large amount of people. ...read more.