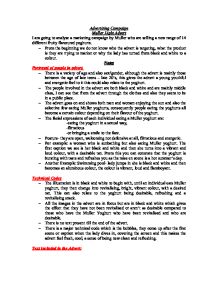 Advertising Campaign Muller Light Advert I am going to analyse a marketing campaign by Muller who are selling a new range of 14 different fruity flavoured yoghurts. * From the beginning we do not know who the advert is targeting, what the product is they are trying to market or why the lady has turned from black and white to a colour. Notes Portrayal of people in advert. * There is a variety of age and also s*x/gender, although the advert is mainly those between the age of late teens - late 20's, this gives the advert a young youthful and energetic feel to it this could also relate to the yoghurt. * The people involved in the advert are both black and white and are mainly middle class, I can see that from the advert through the clothes and also they seem to be in a public place. * The advert goes on and shows both men and women enjoying the sun and also the selective few eating Muller yoghurts, consequently people eating the yoghurts all become a certain colour depending on their flavour of the yoghurt. ...read more.

* All the images in the advert are in focus but are in black and white which gives the effect that they have not been revitalised or aren't as desirable compared to those who have the Muller Yoghurt who have been revitalised and who are desirable. * There is no text present till the end of the advert. * There is a major technical code which is the bubbles, they come up after the first scene or caption when the lady dives in, covering the screen and this makes the advert feel fresh, cool, a sense of being new clean and refreshing. Text included in the Advert: * The slogan is present on every Muller yoghurt that we see, Muller use the slogan ' Lead a Muller life' * We are given the information that there are 15 delicious fruity flavours that are tasty than normal. * Those who are being addressed by this advert are a variety of ages, as from in the advert there were those who were 10- 12 years old and there was also a woman present who was around early 60's. ...read more.

them change colour then they zoom up on the person eating the yoghurt focussing on their facial expressions and also focusing on the yoghurt pot itself. * The mise en scene is black and white and suggests to the reader that they are not leading the suitable life, although they seem to be having fun their life is still dull (usage of colours i.e. the blacks and whites and greys) without the Muller life. The function of the advert as a whole: * This advert is aimed at a wide range of audience; it's aimed at children and adults, children to pester their parents and adults who want to be energetic! * The advert is promising 15 delicious fruity Muller yoghurts new on sale, an improved recipe. * The music in the background and the background chatting are also allocated inn previous adverts and so some previous knowledge is needed, to recognise Muller's them tune. * In the publication the advert appears between the soaps which is from 7 onwards. So the product is aimed for the older children i.e. those who are around the age of 10 upwards. ...read more.