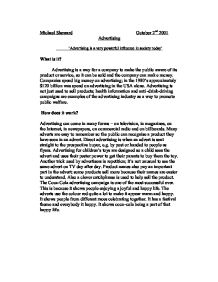 Advertising is a very powerful influence in society today

Michael Sheward October 2nd 2001 Advertising 'Advertising is a very powerful influence in society today' What is it? Advertising is a way for a company to make the public aware of its product or service, so it can be sold and the company can make money. Companies spend big money on advertising; in the 1980's approximately $120 billion was spend on advertising in the USA alone. Advertising is not just used to sell products; health information and anti-drink-driving campaigns are examples of the advertising industry as a way to promote public welfare. How does it work? Advertising can come in many forms - on television, in magazines, on the Internet, in newspapers, on commercial radio and on billboards. ...read more.

The adverts use the colour red quite a lot to make it appear warm and happy. It shows people from different races celebrating together. It has a festival theme and everybody it happy. It shows coca-cola being a part of that happy life. What are its affects on people? Adverts are designed to be persuasive so people buy the product. Many people like to see a story or a character on an advert; this makes them relate to the advert so they will buy the product. Another technique used by sales people is humour. If people see something that is funny they will remember it. The Lynx deodorant adverts at the moment are funny and this makes them easy to remember and helps boost sales of the product. ...read more.

One advertising agency was reported to be handling over �5.3 billion in accounts. Role in Life today Today you can't escape advertising. It's everywhere. You walk outside its on a billboard. You switch the TV on and it's on there. You go on the Internet and its everywhere on web sites. It's in newspapers and magazines. You are probably advertising right now, your shoes have probably got a little logo on them. I think it is impossible not to be influenced by advertising today. You can't do anything about it; it's just the way of the world. I bet even the advertisers sometimes get influenced by adverts. The only way you cannot be influenced by advertising is by hiding in a box in your living room, but I expect even the box would have the manufacturers logo on! ...read more.