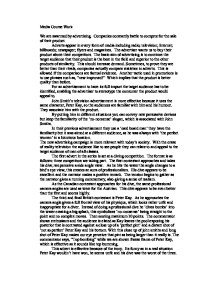 Media Course Work We are swarmed by advertising. Companies constantly battle to compete for the sale of their product. Adverts appear in every form of media including radio; television; Internet; billboards; newspaper; flyers and magazines. The advertiser wants us to buy their product above their competitors. The basic aim of advertising is to convince the target audience that their product is the best in the field and superior to the other products of similarity. This should increase demand. Sometimes, to prove they are better than their rivals, companies actually compare statistics in adverts. This is allowed if the comparisons are factual evidence. Another tactic used in promotions is to use phrases such as, "new improved!" Which implies that the product is better quality than before. For an advertisement to have its full impact the target audience has to be identified, enabling the advertiser to stereotype the consumer the product would appeal to. John Smith's television advertisement is more effective because it uses the same character, Peter Kay, so the audiences are familiar with him and his humour. They associate him with the product. By putting him in different situations you can convey new persuasive devices but keep the familiarity of the 'no-nonsense' slogan, which is associated with John Smiths. In their previous advertisement they use a 'card board man' they have the familiarity but it was aimed at a different audience, as he was always with 'the perfect women' in a luxurious location. ...read more.

Peter Kay is generally funny any way, but by giving him the right dialogue and putting him in a certain situation it's a humorous event. Another in the series is set again in a restaurant, similarly to the previous restaurant setting the lighting and the music all add to the authenticity of the surroundings. The same people as in the previous advert are chatting about children growing up fast. Peter Kay's contribution to the conversation is to say his daughter asked how babies were made. The camera moves in for a close up on his partner's expression as she asks, expecting the worst, "And what did you say?" The close up shot as well as the tone of his partners voice add to the effectiveness and humour. We expect, as they do, he is going to say something totally inappropriate. He launches into the graphic s****l description he gave his daughter using adult terms such as, "v****a", "sperm" and "e***t p***s". To make his description more humorous and graphic he uses his sheesh kebab as a visual aid to demonstrate the s****l act. The humour is increased as he eats the kebab at the end. Everything in the restaurant stops abruptly, the music and all background noise. All the people around assume a shocked posture. This is effective in showing just how tactless he has been The humour used in this case is quite visual, with the use of close ups on facial expressions to show peoples reactions. ...read more.

However the advert is very much in keeping with the slogan 'no nonsense!' I like this advert because of Peter Kay's reference to his mothers moustache and his blunt manner. The way the photographs switch at the end of the advert give a final add the humorous advert. To conclude these advertisements are targeting the stereotypical audience of males. They achieve this by: � Linking beer with sport. � Using Peter Kay whose humour appeals to men. � Using typical everyday settings e.g. restaurant. By combining effective use of lighting camera angles and dialogue with normal life situations, such as in the Indian restaurant, or at home with his mum. The advertisements provide maximum impact, which makes them successful. This is very subtle because with the humour and settings you do not fully realise the complex methods of persuasion being used. Overall each of the adverts analysed are set in different locations they all promote John Smiths but each advert does slightly differently. Both of the adverts set in the Indian restaurant are explicit in their persuasion. They use close up images of Peter Kay addressing the camera whilst others are drinking the product. In contrast, the diving, the football and the advert with his mother all use a more subtle approach. We don't see the product being drunk or compared to competitor's products, but with the 'no-nonsense' slogan and a cleverly positioned still shot of the bitter the message is still clear. Despite the differences in methods all the adverts are realistic and simplistic in terms of their settings and dialogue. The whole series appear completely naturalistic and not at all staged. ...read more.