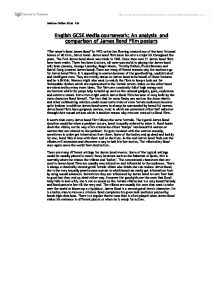 An analysis and comparison of James Bond Film posters.

English GCSE Media coursework: An analysis and comparison of James Bond Film posters "The name's Bond James Bond" In 1952 writer Ian Fleming created one of the best fictional heroes of all time, James bond. James bond films have become a major hit throughout the years. The first James bond Movie was made in 1962. Since then over 21 James bond films have been made. There has been 6 actors, all were successful in playing the James bond roll; Sean cannery, George Lazenby, Roger Moore, Timothy Dalton, Pierce Brosnan and Daniel Craig (current James bond).There are many different reasons why the audience go for James bond films. It is appealing to women because of the good-looking, sophisticated and intelligent men. They are mainly drawn to James bond as he has all of these features and he is British. Women might also want to watch the films to keep a look out for fashionable clothes which are represented in the female actors. Males on the other hand are attracted by many more ideas. The films are constantly full of high energy and excitement which the props help to build up such as the unusual gadgets, guns, explosions and extreme stunts. Some men might watch James Bond films because of envy built by the main character Bond himself. ...read more.

The red suit is symbolic as it denotes love therefore suggesting James Bond is a very romantic man. Maybe the red suit is combined with the gun to alert the audience of coming danger and violence. He is surrounded by half naked, sexy looking girls suggesting that he is very attractive which is appealing to a female audience in addition indicating romance in the film. The fact that he is with many girls implies he is not a sustained relationship hence he is a player. One of the girls seems to stand out from the rest, she is not placed as close to Bond as the other girls. While the other girls are half naked, she is wearing a very sexy looking black dress looking directly at Bond. Both her body language and dress sense shows she could be s******y attracted to Bond. Maybe she envies him. The black dress symbolizes evil and death. This indicates she could be the stereo typical female villain who will die in the film. In this shot all of the ladies are represented as very beautiful s*x-objects, this is appealing to male spectators. We notice that the ladies hair styles look old-fashioned suggesting the film was timed in the 60's. One of the most eye-catching images on this poster is the text. ...read more.

Personally I would go for the second poster as it is much more appealing to younger viewers. It has more explosions, violence, action and the characters are set in the 21st century which we can relate to hence it will produce a wider audience than the first one. The second poster is also a lot more effective, all the images blend in well with the luminous fire background; therefore it is much more eye-catching than the first poster. On the other hand the first poster has a certain mystical feel to it as there are certain characters that the audience will be curious about such as the driver that is holding back Bond or the mysterious women in black. In addition the phrases such as "LOOK UP..." "HERE COMES THE BIGGEST BOND OF ALL" is very effective as it is quite persuasive; it builds up curiosity and tension questioning the audience's mind. The first poster is more appealing to older viewers, couples or just any real James bond lover as it ends with a much more romantic look. If we came to think about it both posters reveal how the 60's has changed significantly, it points out that the 21st century has become a violent world, so could the next James Bond film be more violent? By Nahima Akther Miah 10s ?? ?? ?? ?? Nahima Akther Miah 10s ...read more.