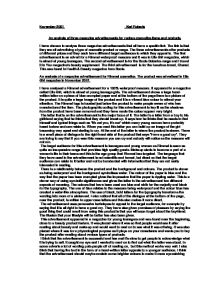 An analysis of three magazine advertisements for various cosmetics items and products.

November 2001 Keri Roberts An analysis of three magazine advertisements for various cosmetics items and products. I have chosen to analyse three magazine advertisements that all have a specific link. The link is that they are all advertising a type of cosmetic product or range. The three advertisements offer products of different prices and they each have different target audiences to which they appeal to. The first advertisement is an advert for a Rimmel waterproof mascara and it was in Elle Girl magazine, which is aimed at young teenagers. The second advertisement is for the Boots Botanics range and I found it in You magazine's beauty supplement. The third advertisement is for the luxurious brand, Chanel. This was found in Health & Beauty magazine from Boots. An analysis of a magazine advertisement for Rimmel cosmetics. The product was advertised in Elle Girl magazine in November 2001. I have analysed a Rimmel advertisement for a 100% waterproof mascara. It appeared in a magazine called Elle Girl, which is aimed at young teenage girls. The advertisement shows a large hand-written letter on a piece of blue crumpled paper and at the bottom of the page there is a picture of the product. It is quite a large image of the product and it is a vibrant blue colour to attract your attention. The Rimmel logo is located just below the product to make people aware of who has manufactured the item. The photographic coding for this advertisement is key lit as the shadows from the product have been removed and they have made the colour appear very bright. ...read more.

I think that this is a very good idea as it makes you focus on the main product and does not divert your attention. They have used symbolic significance for the main object of the advert, the mascara brush. Instead of using a regular brush they have symbolised it by using a picture of a fern tree. This interpretation of the product relates to the main selling point of how natural it is and I think it is a very clever marketing plan. I think this because many people would see the unusual picture and then they would want to read on to discover more about it. The colours that have been used are mainly white and green to keep the natural atmosphere. The symbolic significance of the colour green is that green is associated with nature and the outdoors by many people. This is another factor that adds to the natural feel of the page. The background is completely white, so that the eye's focus is on the product itself. I think that the white, plain background is to symbolise the purity of the products. There is a small piece of dialogue to the right-hand side of the advert that gives you an insight into the products and examples of how they can help you. They have applied scientific terminology in their advert to impress the audience and persuade them into buying the products. They have said that "Botanics uses modern science" persuade the audience that their products are very good. ...read more.

The colours worked very well and the resembled the image of the product. If Chanel had of used bright, striking colours it may of put more up market women off of buying the product. I decided to pick these three advertisements, because they are all cleverly planned and they caught my attention instantly. The link between the three advertisements is that they are all advertising a type of beauty product, but they each cater for a different price range. Rimmel is good value for money, Botanics is average priced and Chanel is a very expensive range. All of these advertisements have a different target audience as well. Rimmel targets younger women, Botanics aims its products at people who like organic products and Chanel is for upper class women who can afford to spend a lot on themselves. All of the advertisements show an image of the product that they are trying to sell, but only two of them contain text. The advertisements that contain text work very well, but so does the Chanel advert which does not contain text. I think that Chanel have used the theory that 'actions speak louder than words.' I have also noticed that many adverts use symbolism to put across their point to the audience, for example the Boots Botanics mascara brush being perceived as a fern tree. I think that the best method of advertising in magazines is to show special offers/deals, for example 3 for 2. Even though this may be one of the most popular methods, it would be too expensive for companies to do this all of the time. ...read more.