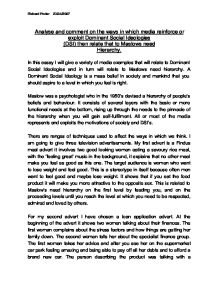 Analyse and comment on the ways in which media reinforce or exploit Dominant Social Ideologies (DSI) then relate that to Maslows need Hierarchy. In this essay I will give a variety of media examples that will relate to Dominant Social Ideologies and in turn will relate to Maslows need hierarchy. A Dominant Social Ideology is a mass belief in society and mankind that you should aspire to a level in which you feel is right. Maslow was a psychologist who in the 1950's devised a hierarchy of people's beliefs and behaviour. It consists of several layers with the basic or more functional needs at the bottom, rising up through the needs to the pinnacle of the hierarchy when you will gain self-fulfilment. All or most of the media represents and exploits the motivations of society and DSI's. There are ranges of techniques used to affect the ways in which we think. I am going to give three television advertisements. My first advert is a Findus meal advert it involves two good looking women eating a savoury rice meal, with the 'feeling great' music in the background, it explains that no other meal make you feel as good as this one. ...read more.

This relates to Maslow by giving you money it is giving you a sense of security and to be admired by the fact that you a have a new car. My third and final piece of advertising is the Lemsip Max Strength advert. The scene is set in an office with two men (one is older than the other) talking about office reports and other office jargon. During the conversation, the younger man finds out that the older man has organised the meeting from home, after he had been using Lemsip Max Strength. The older man then uses a small but effective catch phrase "...This sorts the men from the boys...". The target audience are young men who want to mature and become men to attract the opposite s*x. The DSI is that you need to be mature in life to get far and being petty and silly is ineffective. Also it reinforces the Dominant Social Ideology that to be happy, we need to be successful in our jobs. Relating this to Maslow it takes you to the second stage of the hierarchy, the need to feel safe from danger and threatening situations. ...read more.

This is the final section to my media piece, British Films. For this section I have chosen the film 'Lock Stock and Two Smoking Barrels'. This gangster film involves a card game gone wrong because of the club boss cheating. The man who lost owes half a million pounds and he has to give it back in a week. The plot thickens but in the end the man who cheated got shot - this shows that lying and cheating is wrong and in the end the good guys always win. This shows that the DSI is that being good and honourable is the best way to be and being bad is unethical and pointless. This relates to Maslow need to be safe because when you become in a criminal fraternity, you always have to "watch your back". The conclusion is that if you are a good, kind, faithful and respectful you will be admired and looked up to by others thus putting you on the road to self-fulfilment. However, if you are deceitful, selfish, disloyal and reckless you will be disliked by others and unable to reach an attainable goal of self-fulfilment. ?? ?? ?? ?? Richard Porter 23/04/2007 ...read more.