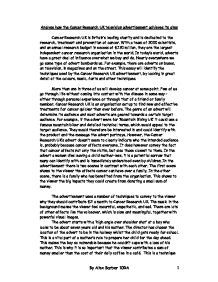 Analyse how the Cancer Research UK television advertisement achieves its aims Cancer Research UK is Britain's leading charity and is dedicated to the research, treatment and prevention of cancer. With a team of 3000 scientists, and an annual research budget in excess of �130 million, they are the largest independent cancer research organisation in the world. In today's world, adverts have a great deal of influence over what we buy and do. Nearly everywhere we go some type of advert bombards us. For example, there are adverts on buses, on television, in magazines and on the street. This essay will identify the techniques used by the Cancer Research UK advertisement, by looking in great detail at the colours, music, fonts and other techniques. More than one in three of us will develop cancer at some point. Few of us go through life without coming into contact with the disease in some way - either through personal experience or through that of a friend or family member. Cancer Research UK is an organisation set up to find new and effective treatments for cancer quicker than ever before. The genre of an advert will determine its audience and most adverts are geared towards a certain target audience. For example, if the advert were for 'Mountain Biking UK' it could use a famous mountain biker and detailed technical terms, which would appeal to the target audience. ...read more.

Her voice used as the musical backdrop in this advert, is particularly poignant and apt. The lyrics to the music "You'll remember me when the west wind moves upon the fields of barley" can also have a reminiscent and nostalgic affect upon the viewer. The hallway portrays family life with shoes on the floor and coats hung up. However the lack of colour in the hallway creates a stark sterile atmosphere that is bereft of the busyness of everyday life. The camera then pans across to the right, the cancer research logo appears on the screen, the camera now gives an over shoulder view with the mother's back to the camera. The mother leans forward and whispers softly into the boy's ear "Don't forget your hanky" and slowly disappears into the mirror. At this point the voiceover says, "We don't have a magic mirror, but at Cancer Research UK, we're helping more and more people survive cancer everyday". The voice is emotional, saying that there is no magic mirror, nothing will bring someone back, but the organisation is developing the cures for cancer. "We're helping more and more people survive cancer everyday". It sounds catchy, and suits the context. It also instills hope into that scene of loss and despair. It encourages the viewer to believe that their financial contribution could avoid such tragedy in the future. This is another technique, which demonstrates what the viewer is 'buying' with their small contribution; hope. ...read more.

Most adverts tend to leave the advert with a key point, or name so that the viewers will remember the product advertised when they next go shopping. The Cancer Research UK's advert finishes with the mother and daughter hugging. The background has a mirror that reflects the light, and warm colours to show the life and future the family has together. The advertisement here is stressing the effectiveness of the product, that is, Cancer Research UK would make good use of your contribution. In my opinion, the advertisement is successful because it shows two scenes that are both similar and contrasting. Both portray family life with a mother and child. However the fundamental difference is life and death. In one scene the mother dies of cancer. In the other the mother survives. The inference is that the person who can really make the difference is the viewer. A modest donation of �2 a month is a small price to pay to alleviate the viewer's guilt, to buy hope and find an effective cure for cancer. The advert empowers the viewer to act in a positive way and this is an appealing message. It also implies that as one in three of us will develop cancer at some point in our lives, and therefore it would be a good and wise investment. This is a beautifully crafted advert that stimulates the senses of sight, sound, and touch. As such, it makes a lasting impression especially as a potential giver can contribute to a happy ending. By Alex Barber 10RA 1 ...read more.