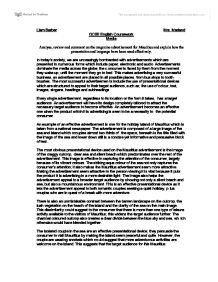 Analyse, review and comment on the magazine advertisement for Mauritius and explain how the presentation and language have been used effectively.

Liam Barber Mrs. Marland GCSE English Coursework Media Analyse, review and comment on the magazine advertisement for Mauritius and explain how the presentation and language have been used effectively. In today's society, we are unceasingly bombarded with advertisements which are presented in numerous forms which include paper, electronic and audio. Advertisements dominate the media across the globe; the consumer is faced by them from the moment they wake up, until the moment they go to bed. This makes advertising a very successful business, so advertisement are placed in all possible places, from bus stops to tooth brushes. The most successful advertisements include the use of presentational devices which are structured to appeal to their target audience, such as; the use of colour, text, images, slogans, headings and subheadings. Every single advertisement, regardless to its location or the form it takes, has a target audience. An advertisement will have its design completely tailored to attract the necessary target audience to become effective. An advertisement becomes an effective one when the product which it is advertising is seen to be a necessity to the potential consumer. ...read more.

The charcoal coloured outcrop also creates a clear divide between the blue sky and sea, which otherwise would have blended together. The isolated couple in the sea are an effective presentational device; they persuade the consumer to visit Mauritius by making the island seem peaceful and quite. However, the couple are wearing snorkels which could suggest that more adventurous activities are welcome on the island. This suggests that the target audience for this Mauritius advertisement are wealthy couples or small families who are looking for either a relaxing or adventurous holiday set in a quiet environment. The clouds in the focal image are effective in attempting to persuade the consumer as they give the whole image believability; if the sky was completely clear, the image would seem too perfect to be real. Ensuring that the image is believable is crucial in making the advertisement effective, if it wasn't the consumer may begin to doubt other sections of the advertisement. The main image then extends down onto the title of the advert; Mauritius. ...read more.

By making it seem as if there was never a problem to fix, it suggests to the consumer that the people of Mauritius care about the visitors. This linguistic device is effective because making the consumer feel cared for could assist in making a sale. The piece of text finishes with the sentence, 'We'd be so pleased to hear from you.' This is an effective linguistic device as it uses personal pronouns to make the person who is reading it feel as if they have been personally addressed. Being addressed personally gives the text more meaning to the reader, as if they have been selected to be invited to Mauritius. The advert for Mauritius is most effective as it appeals to a wide range of consumers by using clever linguistic and presentational devices to attempt to persuade the consumer to visit Mauritius. The presentational devices first attract the consumer's attention using colour and images, the linguistic devices then attempt to increase the consumer's interest further by using highly descriptive language of the island of Mauritius. ...read more.