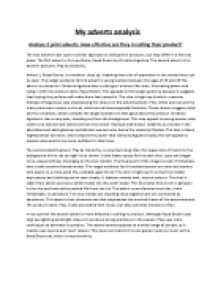 Analyse Royal Desire by Christina Aguilera and Play by Givenchy. . How effective are they in selling their products?

﻿My adverts analysis Analyse 2 print adverts. How effective are they in selling their product? The two adverts have quite a similar approach to selling their products, but they differ in a few key areas. The first advert is for a perfume, Royal Desire by Christina Aguilera. The second advert is for another perfume, Play by Givenchy. Advert 1, Royal Desire, is a medium close up, meaning that a lot of expression in the models face can be seen. The target audience for this advert is young women between the ages of 15 and 25.The advert is centred on Christina Aguilera who is sitting on a throne like chair, illustrating power and tying in with the product name, Royal Desire. ...read more.

Christina Aguilera?s skin is very pale, standing out from the background. This may appeal to young women who want to be noticed and stand out from the crowd. Having a well-known celebrity as a model in the advertisement adds glamour and attracts women who desire the celebrity lifestyle. The shot is taken slightly below eye level, which depicts the power that Christina Aguilera holds; this will appeal to women who want to be more confident in their lives. The second advertisement, Play by Givenchy, is a medium long shot; this leaves lots of room for the background of the city at night to be shown. It also leaves space for the pack shot, copy and slogan to be viewed without impinging on the two models. ...read more.

This illustrates how much is going on in the city and how action packed life there can be. The advert uses a famous musician, Justin Timberlake, to add allure. The two models are standing close together and are connected by earphones. This depicts their closeness and also emphasises the musical theme of the advertisement. The product name, Play, is also associated with music, but also connotes emotions of fun. In my opinion the second advert is more effective in selling its product. Although Royal Desire uses high key lighting and bright colours to produce strong emotions in the viewer, Play uses more techniques to advertise its product. The advertisement appeals to a wider range of people, as it mainly uses neutral and ?cool? colours. This does not restrict it to one gender quite as much as the Royal Desire ad, which is very feminine. ...read more.