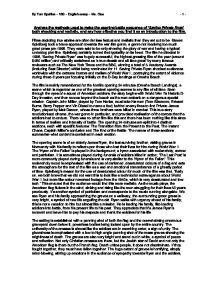 Analyse the methods used to make the opening battle sequence of Saving Private Ryan both shocking and realistic, and say how effective you find it as an introduction to the film.

Analyse the methods used to make the opening battle sequence of 'Saving Private Ryan' both shocking and realistic, and say how effective you find it as an introduction to the film. Films depicting true stories are often far less factual and realistic than they set out to be. Steven Spielberg took a brave approach towards the war film genre, a genre not receiving too much great press pre-1998. They were said to be only showing the glory of war and having a typical underdog plot-line. Spielberg certainly turned that typicality on its head. The film he directed in 1998, 'Saving Private Ryan' was hugely successful, the highest-grossing film of the year (around $480 million) and critically acclaimed as 'a true classic and all-time great' by many famous reviewers such as The New York Times and the BBC, winning a total of 5 Academy Awards (including Best Director) whilst being nominated for 11. Saving Private Ryan shocked audiences worldwide with the extreme horrors and realism of World War II, portraying the extent of violence during those 6 years yet focusing initially on the D-Day landings at Omaha Beach. The film is mainly remembered for the horrific opening 24-minutes (Omaha Beach Landings), a scene which is regarded as one of the greatest opening scenes to any film of all time. Seen through the eyes of a squad of American soldiers, the story begins with World War II's historic D-Day invasion, and then moves beyond the beach as the men embark on a dangerous special mission. Captain John Miller, played by Tom Hanks, must take his men (Tom Sizemore, Edward Burns, Barry Pepper and Vin Diesel to name a few) behind enemy lines to find Private James Ryan, played by Matt Damon, whose three brothers were killed in combat. This true story revolutionised cinema, the war genre in particular, and provoked realisation of the terrors that the soldiers had to endure. ...read more.

This sets the mood of the battle and prepares the audience for terror, another realistic aspect Spielberg has considered that war contains, the fear and anxiety violence brings. The dimmed colour enhances the overall experience of the event. The silence of the soldiers emphasises their fear and vulnerability. The appropriately named 'Instant Chaos' scene starts as the boats reach the shores. The boat doors slide open and many of the soldiers you had just become familiar with are immediately splattered with bullets, their blood flying everywhere and body parts start falling off. The noise of bullets erupts over the waves and is almost deafening, a further realistic aspect Spielberg has considered. The soldiers are quickly falling to the ground like rag dolls, unable to get out of the way or find protection. Screams are surrounding you as you watch each person die one by one, the first person perspective making you feel as if you are fighting the battle with them. Spielberg has used handheld cameras throughout this opening sequence to give the audience a more realistic experience. You feel every shake, hear every bullet and every scream, run every metre towards safety. The reason for the usage of these cameras was that he '... wanted to hit sets much like a newsreel cameraman following soldiers into war.' Many men struggle to escape from the boats unharmed and go overboard into the sea. The handheld cameras come into great effect here as well as the sound effects, the sound disappears much like real life and the pace slows right down making you feel as if you are struggling with them to escape to safety. Everything moves in what seems like slow-motion as the bullets ripple through the water, some hitting soldiers, their blood darkening the surrounding water. This increases fear amongst the already terrified audience due to the intense realism of the film. As you crawl out of the water towards the iron hedgehogs, the sound goes in and out of earshot as the camera bobs in and out of the water, the men struggling for energy. ...read more.

We see a close-up of Miller similar to that of Ryan in the graveyard, we become familiar with his emotions and how stressed he has become due to the war. His eyes are dark, he has lost his innocence and an establishing shot is revealed. It's a high angle long shot showing the effects the war had on the coast of France, the battlefield full of bodies and explosives. The sea is blood red, calm waves brushing past the soldiers' bodies, emphasising the price of peace. It's a shocking image that shows the true effects of war, it's destruction of the landscape and the utter loss of life. The music that was in the graveyard earlier in the sequence gently fades in, calming the audience down after such a torrid and exhausting battle. The solemnity of the images is deepened by the melancholy music. The camera tracks one soldier through the countless dead bodies, a man with a backpack on which 'RYAN.S' is written. This now establishes the link between the title of the film and the graveyard scene earlier on, enabling the audience to familiarise themselves with the plot. 'The last thing I wanted to do in this picture was use the war simply as a springboard for action-adventure. I was looking for realism all the time.' Spielberg stated; he undeniably did what he set out to do. His masterpiece's opening sequence is one of the greatest of all-time, capturing the audience's imagination and throwing them right into the action. It shocks, amazes and saddens you with great effect. Your heart pounds through every bullet fired and you feel as nervous as the soldiers. It eclipsed the war genre and has set the next benchmark standard for the genre. It brought so much realism into it, many war veterans thinking they were watching what they had experienced. The intensity of the action is overwhelming, setting it apart from every other film and providing a true insight into the horrors of war. ?? ?? ?? ?? By Tom Spellins - 10S - English essay - Ms. Clee - 1 - ...read more.